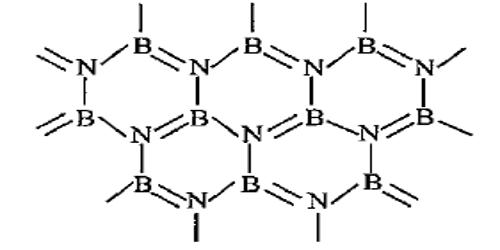 Boron nitride is a thermally and chemically resistant refractory compound of boron and nitrogen with the chemical formula BN. It exists in various crystalline forms that are isoelectronic to a similarly structured carbon lattice. Boron nitride is a very important inert material that has excellent thermal shock resistance, anisotropic thermal properties, good dielectric properties, and low strength. BN possesses the second-highest thermal conductivity after diamond and relatively low dielectric constant. The boron nitride conglomerate was initiated by Balmain 1842 and achieved to form powders by GE scientist named Robert H. Wentorf in 1957 only. GE named the product commercially as Borazon.

Boron nitride has different types of structural formation that rely on the lattice plan direction of boron and nitrogen atoms. The structures include amorphous, hexagonal, cubic, wurtzite form. The hexagonal form corresponding to graphite is the most stable and soft among BN polymorphs and is therefore used as a lubricant and an additive to cosmetic products. The cubic (sphalerite structure) variety analogous to diamond is called c-BN; it is softer than diamond, but its thermal and chemical stability is superior. The rare wurtzite BN modification is similar to lonsdaleite but slightly softer than the cubic form. Cubic boron nitride (c-BN) has exceptional properties such as hardness, strength than relating with other ceramics so that are most commonly used as abrasives and in cutting tool applications.

Boron nitride is typically neutral when reacting to acids. General acids do not show a high degree of exfoliation, although using a high protic acid such as methyl sulfonic acid exfoliation was much more successful. It is a synthetically produced crystalline compound of boron and nitrogen, and industrial ceramic material of limited but important application, principally in electrical insulators and cutting tools. It is a powder in physical form, in other ways analogous to graphite. The size of the flake commercially available is h-BN varying from hundreds of nanometers to tens of microns. Allotropes of BN, in-particular h-BN, and c-BN exhibit high stability in terms of thermal and chemical nature. h-BN is more stable even without deteriorating at exceeding the temperatures 1000°C (air), 1400°C (vacuum), and up to 2850°C (inert atmosphere).

Because of excellent thermal and chemical stability, boron nitride ceramics are traditionally used as parts of high-temperature equipment. It is a platy powder consisting, at the molecular level, of sheets of hexagonal rings that slide easily past one another. Boron nitride has potential use in nanotechnology. Nanotubes of BN can be produced that have a structure similar to that of carbon nanotubes, i.e. graphene (or BN) sheets rolled on themselves, but the properties are very different.