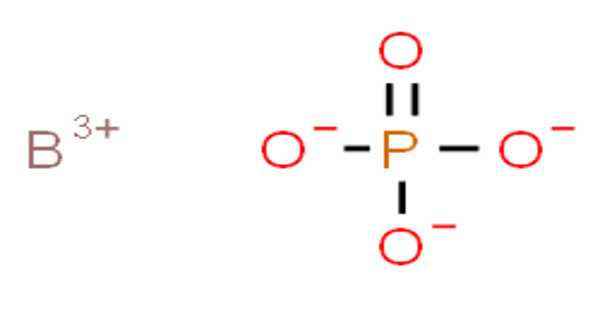 Boron phosphate has the chemical formula BPO4 and is an inorganic compound. The reaction of phosphoric acid and boric acid is the most basic method of producing it. It is a white infusible solid that evaporates at temperatures above 1450°C.

Boron phosphate is an inorganic salt that is used by the chemical industry as a catalyst in organic synthesis and, more recently, as a component in material science research.

Boron phosphate can be either an amorphous white solid or a crystalline solid depending on the method of preparation. It has a density of 2.52 g ml-1. Boron phosphate has no melting point because it is infusible. However, the solid evaporates at temperatures above 14500C. The amorphous BPO4 solid is water-soluble, but the crystalline structures are not.

Boron phosphate is synthesized from phosphoric acid and boric acid at a temperature range from 80 °C to 1200 °C. The relatively cold treatment produces a white amorphous powder, which is converted to a microcrystalline product when heated at about 1000 °C for 2 hours.

The main reaction of the process is:

New ways of synthesizing the compound have also been reported, such as hydrothermal and microwave synthesis.

Due to the particular industrial interest of boron phosphate, other methods are used as well:

BPO4 is the chemical formula for boron phosphate. It has a molecular mass of 105.78 g mol-1. The cation B+3 and the anion PO4-3 combine to form the boron phosphate molecule, with the anion corresponding to the total ionization of phosphoric acid H3PO4.

When obtained under pressure, the ordinary structure is isomorphous with -cristobalite, whereas when subjected to high pressure, a compound isomorphic with α-quartz is obtained. Depending on how the boron phosphate is prepared, it may have different structures, such as noncentrosymmetric tetragonal, which is similar to the quartz structure. AlPO4, berlinite, has an isomorphous structure with α-quartz.

Boron phosphate is made by reacting phosphoric acid (which is responsible for the formation of phosphate ions) with boric acid, which is a boron source. The reaction can be carried out at temperatures ranging from 80 to 1200 degrees Celsius, with the temperature influencing the crystalline structure of the resulting solid. The process is described by the reaction:

Boron phosphate is a skin, respiratory, and eye irritant. It is poisonous if consumed. Long-term exposure can be hazardous to one’s health. It is not combustible. When it comes into contact with other chemical compounds, it does not react.