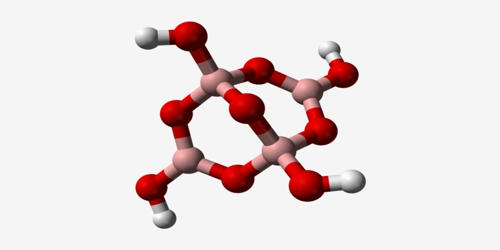 Suboxide is an oxide containing a relatively small amount of oxygen. Boron suboxide is a solid compound with a structure built of eight icosahedra at the apexes of the rhombohedral unit cell. The pure boron suboxide (B6O) powder admixed with 1.08 vol% of MgO, CaO, and CaCO3 (corresponding to 1.5, 1.4, and 0.7 wt%, respectively) were synthesized by hot-pressing and the mechanical properties were evaluated. Each icosahedron is composed of twelve boron atoms. Two oxygen atoms are located in the interstices along the rhombohedral direction.

B6O can be synthesized by reducing B2O3 with boron or by oxidation of boron with zinc oxide or other oxidants. The addition of the alkaline earth metal oxide additives resulted in the formation of boride and borate phases, depending on the oxide used. These boron suboxide materials formed at or near ambient pressure are generally oxygen-deficient and non-stoichiometric (B6Ox, x<0.9) and have poor crystallinity and very small grain size (less than 5 μm). The mechanical properties of the hot-pressed materials were characterized based on their density, hardness, and fracture toughness.

High pressure applied during the synthesis of B6O can significantly increase the crystallinity, oxygen stoichiometry, and crystal size of the products. Between 95 and 98% of the theoretical densities were achieved and the result indicates a good combination of hardness (between 31.6 and 32.1 GPa) and fracture toughness (between 6.1 and 6.8 MPa.m0.5) in the B6O-alkaline earth metal oxide materials. Mixtures of boron and B2O3 powders were usually used as starting materials in the reported methods for B6O synthesis. The introduction of the additive enhances the fracture toughness of the pure B6O-materials, while the fracture mode observed in the sintered materials is mainly transgranular.