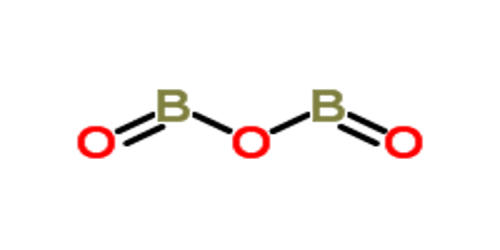 Boron trioxide is one of the oxides of boron. It is a glass-like solid or white powder with the chemical formula B2O3. It is a white, glassy solid with the formula B2O3. It is almost always found as the vitreous (amorphous) form; however, it can be crystallized after extensive annealing (that is, under prolonged heat). Boron however is a metalloid so with no polyatomic ions it can form ionic bonds(one of its metal properties) but can also form quite a few covalently bonded molecules(one of its nonmetal properties). It has low toxicity, though it is irritant to skin, mouth, nose, and eyes.

Glassy boron oxide (g-B2O3) is thought to be composed of boroxol rings which are six-membered rings composed of alternating 3-coordinate boron and 2-coordinate oxygen. Because of the difficulty of building disordered models at the correct density with many boroxol rings, this view was initially controversial, but such models have recently been constructed and exhibit properties in excellent agreement with the experiment. It is now recognized, from experimental and theoretical studies, that the fraction of boron atoms belonging to boroxol rings in glassy B2O3 is somewhere between 0.73 and 0.83, with 0.75 (​3⁄4) corresponding to a 1:1 ratio between the ring and non-ring units. The number of boroxol rings decays in the liquid state with increasing temperature. When produced from boric acid, it forms as a non-crystalline mass that is very hard and difficult to grind, forming a very fine powder when ground very similar to a solid plane of glass.

The crystalline form (α-B2O3) is exclusively composed of BO3 triangles. This trigonal, quartz-like network undergoes a coesite-like transformation to monoclinic β-B2O3 at several gigapascals (9.5 GPa). It is very unreactive towards most common reagents. While an anhydride oxide, it does not react with water visibly.