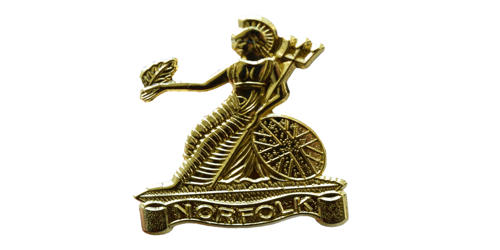 Britannia metal is a silvery alloy consisting of tin with about 5–15 percent antimony and usually some copper, lead, or zinc. It is a specific type of pewter alloy, favored for its silvery appearance and smooth surface. The composition by weight is typically about 92% tin, 6% antimony, and 2% copper. The term “Britannia” has a couple of meanings in the metal refining industry. There is Britannia silver, a grade of silver purity and composition, and Britannia metal, which is a type of alloy. As an alloy, it has characteristics that permit articles to be made by cold-forming the alloy in sheet form rather than by casting. It is a pewter-based alloy that is favored for its smooth surface and silvery appearance. This metal has higher hardness and strength when compared to pewter.

Britannia metal is usually spun rather than cast and melts at 255 degrees Celsius. The melting point of Britannia alloy is 225°C. This metal alloy is very smooth, which makes it a perfect base metal for electroplating and gilding. As a matter of fact, the Oscars presented at the Academy Awards are made of Britannia with gold plating.

Britannia metal was first produced in 1769 or 1770. The alloy is first mentioned in 1769, as “Vickers White Metal,” but it was during the 19th century that the advantages of Britannia metal were appreciated. James Vickers created it after purchasing the formula from a dying friend. It was originally known as “Vickers White Metal” when made under contract by the Sheffield manufacturers Ebenezer Hancock and Richard Jessop. In 1769 James Vickers discovered that with the addition of more antimony to the pewter mixture, the resultant alloy could be turned into a sheet of metal.

It is commonly used as the base metal for cutlery with silver gilded on top. It is used for making various utensils, including teapots, jugs, drinking vessels, candlesticks, and urns, and for official maces. The alloy was much-used as a base for silver plating. The alloy was normally used as a more economic electroplated nickel silver which is highly durable. Until 2016, britannium was used to make the solid core of the Oscar statuettes. The 8½ lb (4 kg) statuettes were Britannia metal plated with gold. The awards have since changed to a bronze core.