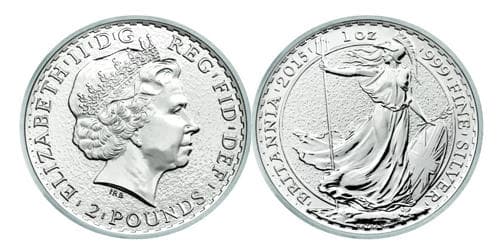 Britannia silver is a hallmarked silver that is at least 95.8 percent pure. The term “Britannia” has a couple of meanings in the metal refining industry. There is Britannia silver, a grade of silver purity and composition, and Britannia metal, which is a type of alloy. It is an alloy of silver containing 11 ozt 10 dwt (i.e. 11½ troy oz.) silver in the pound troy, equivalent to ​23⁄24, or 95.833% by weight (mass) silver, the rest usually being copper. Although the two forms of Britannia are very different in terms of value, they are both lustrous, silvery metals. Britannia-silver is a standard of purity first issued by the British parliament in 1697. It contains 95.84% silver (the rest is usually copper). The other 4.16% of its composition is made of copper and other metals.

This standard was introduced in England by Act of Parliament in 1697 to replace sterling silver (92.5% silver) as the obligatory standard for items of “wrought plate”. Britannia metal is very similar to pewter. It’s an alloy containing 93% tin, 2% copper, and 5% antimony (a metal similar to lead). Britannia standard silver was introduced as part of the great recoinage scheme of William III from 1696 when attempts were made to limit the clipping and melting of sterling silver coinage. Britannia metal alloy is very smooth, which makes it a perfect base metal for electroplating and gilding. Britannia silver was meant to become the new metal-working standard of purity for special and artisanal projects – replacing sterling silver, which is 92.5% pure.

Britannia silver is considerably softer than sterling, and after complaints from the trade, sterling silver was again authorized for use by silversmiths from 1 June 1720, and thereafter it has remained an optional standard for hallmarking in the United Kingdom and Ireland.

There are several marks that can indicate a piece is Britannia silver. Since the hallmarking changes of 1 January 1999, Britannia silver has been denoted by the millesimal fineness hallmark 958, with the symbol of Britannia being applied optionally. It also is known as 958 silver was introduced in Great Britain in 1697 as a compulsory higher purity standard for silver plate. Prior to this time, both silver plate and silver coins were made at 925 or “sterling” silver purity.

The Britannia figure is widely recognized and was the first of the Britannia silver marks introduced to indicate. 958 silver fineness. The silver bullion coins of the Royal Mint issued since 1997, known as “Britannias” for their reverse image, were minted in Britannia standard silver until 2012 when they switched to 999 pure silver. Later, a “lions head erased” mark was introduced for the Worshipful Company of Goldsmiths. The number “958” is also stamped on Britannia silver pieces. It should be distinguished from Britannia metal, a pewter-like alloy containing no silver.