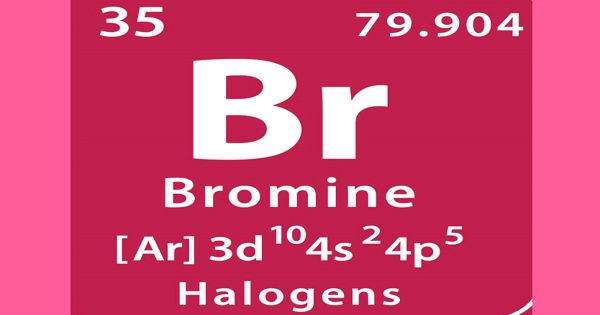 Bromine is a chemical element with the symbol Br and atomic number 35. It is a deep red noxious liquid and a member of the halogen elements, or Group 17 (Group VIIa) of the periodic table. It is the third-lightest halogen and is a fuming red-brown liquid at room temperature that evaporates readily to form a similarly colored gas. It was discovered in 1826 by the French chemist Antoine-Jérôme Balard in the residues (bitterns) from the manufacture of sea salt at Montpellier. It is used in many areas such as agricultural chemicals, dyestuffs, insecticides, pharmaceuticals, and chemical intermediates. It is corrosive to human tissue in a liquid state and its vapors irritate eyes and throat. Bromine vapors are very toxic to inhalation.

Its properties are thus intermediate between those of chlorine and iodine. It boils at 58.8°C (137.8°F), and its density is 3.1023 grams per cubic centimeter. Bromine freezes at -7.3°C (18.9°F). It is very harmful to the atmosphere. According to Chemicool, bromine atoms are 40 to 100 times more destructive in the ozone layer than chlorine atoms.

Bromine is a moderately abundant element. Its abundance in the Earth’s crust is estimated to be about 1.6 to 2.4 parts per million. Elemental bromine is very reactive and thus does not occur free in nature but in colorless soluble crystalline mineral halide salts, analogous to table salt. Bromine compounds can be used as flame retardants. They are added to furniture foam, plastic casings for electronics, and textiles to make them less flammable. While it is rather rare in the Earth’s crust, the high solubility of the bromide ion (Br−) has caused its accumulation in the oceans. 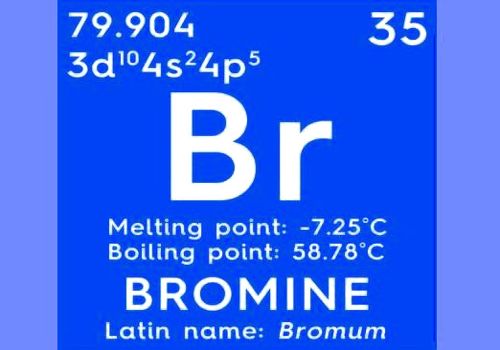 Bromine is used in making fumigants, dyes, flameproofing agents, water purification compounds, sanitizes, medicinals, agents for photography, and in brominates vegetable oil, used as an emulsifier in many citrus-flavored soft drinks. It has a large variety of uses including in agricultural chemicals, insecticides, dyes, pharmaceuticals, flame-retardants, furniture foam, gasoline, plastic casings for electronics, and film photography.

A rare element, bromine is found in nature dispersed throughout Earth’s crust only in compounds as soluble and insoluble bromides. Commercially the element is easily extracted from brine pools, mostly in the United States, Israel, and China. The mass of bromine in the oceans is about one three-hundredth that of chlorine. In some regions, the abundance of bromine is even higher. For example, the Dead Sea (which borders Israel and Jordan), has a high level of dissolved salts.