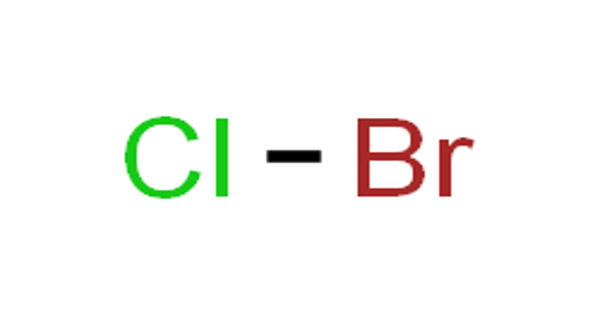 Bromine monochloride, also called bromine(I) chloride, bromochloride, and bromine chloride is an interhalogen inorganic compound with the chemical formula BrCl. It contains bromine in its +1 oxidation state and chloride ions. It appears as a reddish-yellow mobile liquid with an irritating odor. It is a very reactive golden yellow gas with a boiling point of 5°C and a melting point of −66°C. It is well known as a bromination agent and as a water treatment chemical. It is a strong oxidizing agent. It is used as an industrial disinfectant.

Bromine reacts with chlorine to produce bromine(I) chloride. This reaction takes place at a temperature near 0°C. This reaction proceeds in the gas phase or in the tetrachloromethane.

It is a red-brown gas. It is an oxidizing agent. It is used in analytical chemistry to see how much mercury is in something. It can be used to kill bacteria and mold in industrial places. It is highly toxic.

Bromine monochloride is used in analytical chemistry in determining low levels of mercury, to quantitatively oxidize mercury in the sample to Hg(II) state. While it is safely used in commerce, its high reactivity argues well for care in its production, use, and storage.

Bromine monochloride is used as a biocide, specifically as an algaecide, fungicide, and disinfectant, in industrial recirculating cooling water systems. The presence of an impurity such as phosgene in the bromine chloride can severely limit the use of such bromine chloride in the manufacture of brominated organic compounds if the phosgene interferes with the manufacturing process.

Addition of bromine monochloride is used in some types of Li-SO2 batteries to increase voltage and energy density.

It is toxic by ingestion or inhalation, and an irritant to skin, eyes, and mucous membranes. Prolonged exposure of the containers to intense heat may result in their violent rupturing and rocketing.