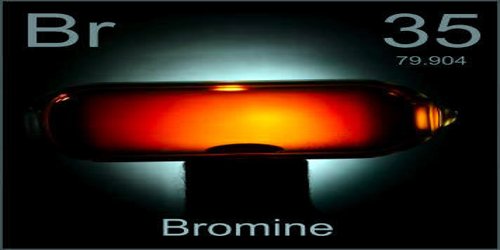 Bromine is a reddish-brown volatile element of the halogen group found in compounds occurring in ocean water. It is a chemical element with symbol Br and atomic number 35. It is the third-lightest halogen, and is a fuming red-brown liquid at room temperature that evaporates readily to form a similarly coloured gas. Its properties are thus intermediate between those of chlorine and iodine. It is used to make dyes, sedatives, and photographic film. Its atomic weight 79.904; atomic number 35; melting point 7.2°C; boiling point 58.78°C; specific gravity 3.12; valence 1, 3, 5, 7. Antoine-Jérôme Balard discovered bromine while investigating some salty water from Montpellier, France. He took the concentrated residue which remained after most of the brine had evaporated and passed chlorine gas into it. In so doing he liberated an orange-red liquid which he deduced was a new element. He sent an account of his findings to the French Academy’s journal in 1826.

A year earlier, a student at Heidelberg, Carl Löwig, had brought his professor a sample of bromine which he had produced from the waters of a natural spring near his home at Keruznach. He was asked to produce more of it, and while he was doing so Balard published his results and so became known at its discoverer.

Bromine is a pretty fascinating element as it is one of only two elements that are liquids at room temperature. It is mercury, the lovely liquid found in our thermometers at room temperature. Bromine has a melting point of around -7 degrees Celsius and boiling point of around 59 degrees Celsius. It has sometimes been considered to be possibly essential in humans, but this is supported by only limited circumstantial evidence, and no clear biological role. As a pharmaceutical, the simple bromide ion (Br−) has inhibitory effects on the central nervous system, and bromide salts were once a major medical sedative, before replacement by shorter-acting drugs. They retain niche uses as antiepileptics. Occurrences, Production and Properties of Bromine

Bromine occurs almost entirely in the form of bromides, especially as Sodium bromide and Magnesium bromide, which are found in many salt springs and salt deposits. The Stassfurt deposits in Germany and the salt waters of Ohio and Michigan are especially rich in bromides. Bromine occurs in nature as bromide salts in Sea Water.

Bromine elements can be classified based on their physical states e.g. gas, solid or liquid. This element is a liquid at room temperature. Bromine is classified as an element in the ‘Halogens’ section which can be located in group 7 of the Periodic Table. The term “halogen” means “salt-former” and compounds containing halogens are called “salts”. The halogens exist, at room temperature, in all three states of matter – Gases such as Fluorine & Chlorine, Solids such as Iodine and Astatine and Liquid as in Bromine. The main sources of bromine are in the United States and Israel. To manufacture bromine, a main component of the patent medicines of the day, brine wells were being drilled near West Virginia and Ohio coal mines. After chemicals such as sulfuric acid and bleaching powder were added to free bromine from other elements in the brine, waste from a neighboring coal mine was used to boil the brine until the reddish-brown liquid bromine came off with the steam. In areas of Michigan where lumbering was done, the same process was used, with waste lumber as the fuel source.

Bromine is the third halogen, being a nonmetal in group 17 of the periodic table. It has the electron configuration [Ar]3d104s24p5, with the seven electrons in the fourth and outermost shell acting as its valence electrons. Corresponding to periodic trends, it is intermediate in electronegativity between chlorine and iodine (F: 3.98, Cl: 3.16, Br: 2.96, I: 2.66), and is less reactive than chlorine and more reactive than iodine. It is also a weaker oxidising agent than chlorine, but a stronger one than iodine. It has two stable isotopes, 79Br and 81Br. These are its only two natural isotopes, with 79Br making up 51% of natural bromine and 81Br making up the remaining 49%. Both have nuclear spin 3/2− and thus may be used for nuclear magnetic resonance, although 81Br is more favourable. Bromine is used in many areas such as agricultural chemicals, dyestuffs, insecticides, pharmaceuticals and chemical intermediates. Some uses are being phased out for environmental reasons, but new uses continue to be found. Its compounds can be used as flame retardants. They are added to furniture foam, plastic casings for electronics and textiles to make them less flammable. However, the use of bromine as a flame retardant has been phased out in the USA because of toxicity concerns. Organobromides are used in halon fire extinguishers that are used to fight fires in places like museums, aeroplanes and tanks. Silver bromide is a chemical used in film photography.

Other uses of organobromine compounds include high-density drilling fluids, dyes (such as Tyrian purple and the indicator bromothymol blue), and pharmaceuticals. Bromine itself, as well as some of its compounds are used in water treatment, and is the precursor of a variety of inorganic compounds with an enormous number of applications.