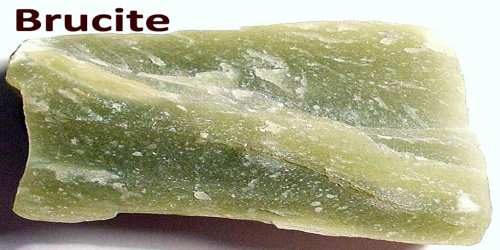 Brucite is the mineral form of magnesium hydroxide, which is occurring in tabular, foliated crystals: used in magnesia refractories. Its chemical formula Mg(OH)2. It generally forms soft, waxy to glassy, white or pale-green, gray, or blue crystals, plate aggregates, or fibrous masses associated with other magnesium minerals (e.g., magnesite and dolomite).It was first discovered in 1824 from the New Jersey serpentine, USA. The mineral was named after the American mineralogist, A. Bruce. Brucite may form as a standalone mineral, but it can also form as layers within minerals of the chlorite group and clay minerals such as Montmorillonite and Smectite. It forms a component of certain types of marbles, which are commercially known as pearl grey marble; a low-temperature hydrothermal vein mineral in metamorphosed limestones and chlorite schists; and formed during serpentinization of dunites. Brucite is often found in association with serpentine, calcite, aragonite, dolomite, magnesite, hydromagnesite, artinite, talc and chrysotile.

Occurrences and Properties of Brucite

Brucite occurs in a white, yellow, gray-blue, gray or blue color. It exhibits perfect cleavage, transparent appearance, non-fluorescent luminescence, and non-magnetic properties. The mineral has irregular fractures, vitreous luster and white streak. It can be formed as lamellar structures or fibrous crystals. The average density of the mineral is 2.39 g/cm3, and its hardness ranges from 2.5 to 3. It was first described in 1824 and named for the discoverer, American mineralogist, Archibald Bruce (1777–1818). A fibrous variety of brucite is called nemalite. It occurs in fibers or laths, usually elongated along, but sometimes crystalline directions.

A notable location in the U.S. is Wood’s Chrome Mine, Cedar Hill Quarry, Lancaster County, Pennsylvania. Yellow and white brucite with a botryoidal habit has been found in Kharan District, Pakistan. Brucite also occurs in the Bela Ophiolite of Khuzdar District, Pakistan.

Although Brucite is generally a common mineral, specimens worthy of collection only come from a handful of locations worldwide. In Italy, light blue crystal plates have come from the Val di Serra Quarry, Pilcante, Trento Province, Italy. The Kalahari manganese field, in Northern Cape Province, South Africa has produced exceptional examples of Brucite. This includes botryoidal aggregates and rounded, ball-like crystals of all colors at the N’Chwaning Mines at Kuruman; and blue and yellow Brucite in rounded crystal masses from the Wessels Mine, at Hotazel. As thin tabular plates and groups of such crystals, in foliated masses, scaly, lamellar, bladed, fibrous, grainy, and massive. May also form as rounded crystal masses, botryoidal, in rounded, ball-like spheres, and with rosette formations. It commonly is present in serpentine and sometimes in phyllites, crystalline schists, and metamorphosed magnesian limestone.

Brucite is used as a source of magnesium, and is also mined for a Brucite marble. Large individual crystals ans well-formed crystal groups are rare and desirable collector’s minerals, especially those from the defunct Wood’s Chrome Mine in Pennsylvania.

Synthetic brucite is mainly consumed as a precursor to magnesia (MgO), a useful refractory insulator. It finds some use as a flame retardant because it thermally decomposes to release water in a similar way to aluminium hydroxide and mixtures of huntite and hydromagnesite. It also constitutes a significant source of magnesium for industry.