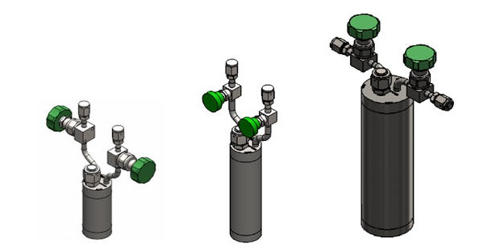 A Bubbler cylinder is a component of a unit for the metal-organic chemical vapor deposition (MOCVD). They are devices that are used for conveying electronic grade metalorganic compounds from a liquid or solid precursor into a usable vapor. Although the majority of the precursors used in the CVD/ALD processes are liquid at room temperature, they are also used in powder form in certain cases. Most precursors are air and/or water-sensitive and very flammable or pyrophoric in nature

The container of the Bubblers is similar to the construction of a gas washing bottle and used for the protected storage of metalorganic compounds to exclude air (oxygen, moisture). Generally, bubblers with internal dip tubes are utilized as a packaging option for liquids, while stainless steel cylinders with suitable seals and fittings are utilized for gases. The bubbler has a supply pipe and a sampling tube. The inlet tube ends just before the bottom of the tube. In this tube, an inert gas is introduced, which bubbles through the liquid chemical; a solid chemical will sublime. Typically, the transfer of liquid precursors into the reaction chamber is performed by bubbling a carrier gas via the container wherein they are stored at or less than room temperature. The mixture of the controlled inert gas and the vaporized chemical leaves the cylinder into a downstream reaction vessel. The temperature is controlled by a thermostat, so that a defined, constant steam pressure can be achieved.

Hydrogen is the most commonly used carrier gas; however, nitrogen or other inert gases can serve the purpose in certain cases. In order to avoid the condensation of the precursor in the tubing that connects the cylinder to the reaction chamber, the likely temperature of the cylinder or bubbler is below the room temperature, if the vapor pressure of the precursor allows. It is possible to avoid condensation by heating the tubing above room temperature if cooling cannot be done.