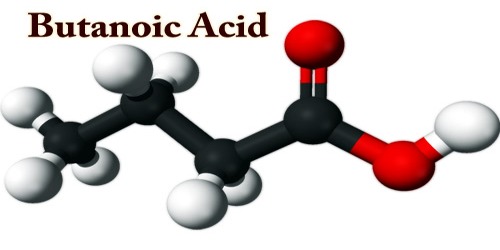 Butanoic acid (C4H8O2) is a carboxylic acid with the structural formula CH3CH2CH2CO2H, also known as Butyric acid (from Ancient Greek: βούτῡρον, meaning “butter”). It is a fatty acid occurring in the form of esters in animal fats and plant oils. As a glyceride (an ester-containing acid and glycerol), it makes up 3–4 percent of butter; the disagreeable odor of rancid butter is that of hydrolysis of the butyric acid glyceride.

Butanoic or Butyric acid appears as a colorless liquid with a penetrating and unpleasant odor. Flashpoint 170°F. Corrosive to metals and tissue. Density 8.0 lb /gal. It was discovered by Lieben and Rossi in 1869. It is also called butyric acid which means the acid of butter as it was first discovered in rancid butter. It was prepared by the butyric fermentation of carbohydrates and by the oxidation of n-butyl alcohol.

Butanoic acid on treatment with water forms acetic acid and ether. The chemical equation is given below.

Butyric (Butanoic) acid is a medium-strong acid that reacts with bases and affects many metals. Butyric acid is found in animal fat and plant oils, bovine milk, breast milk, butter, parmesan cheese, and as a product of anaerobic fermentation (including in the colon and as body odor, and vomit). Butyric acid has a taste somewhat like butter and an unpleasant odor. Mammals with good scent detection abilities, such as dogs, can detect it at 10 parts per billion, whereas humans can detect it only in concentrations above 10 parts per million. In food manufacturing, it is used as a flavoring agent.

In humans, butyric acid is one of two primary endogenous agonists of human hydroxycarboxylic acid receptor 2 (HCA2), a Gi/o-coupled G protein-coupled receptor. Butyric acid or fermentation butyric acid is also present as the ester octyl butyrate in parsnip (Pastinaca sativa) and in the seed of the ginkgo tree.

In humans, the relationship between luminal butyrate exposure and CRC has been examined only indirectly in case-control studies, by measuring fecal butyrate concentrations, although this may not accurately reflect effective butyrate exposure during carcinogenesis. Perhaps not surprisingly, the results of these investigations have been mutually contradictory. The direct effect of butyrate on tumorigenesis has been assessed in a no. of in vivo animal models, which have also yielded conflicting results. In part, this may be explained by methodology: differences in the amount and route of butyrate administration, which are likely to significantly influence the delivery of butyrate to the distal colon.

Butyric acid is industrially prepared by Butyraldehyde oxidation. Saturation with salts such as calcium chloride can isolate it from the aqueous solutions. When dissolved in hot water, the calcium salt, Ca(C4H7O2)2·H2O, is relatively less soluble.

Butanoic acid, also known as Butyric acid is used in the preparation of various butyrate esters. It is used to produce cellulose acetate butyrate (CAB), which is used in a wide variety of tools, parts, and coatings, and is more resistant to degradation than cellulose acetate. However, CAB can degrade with exposure to heat and moisture, releasing butyric acid.