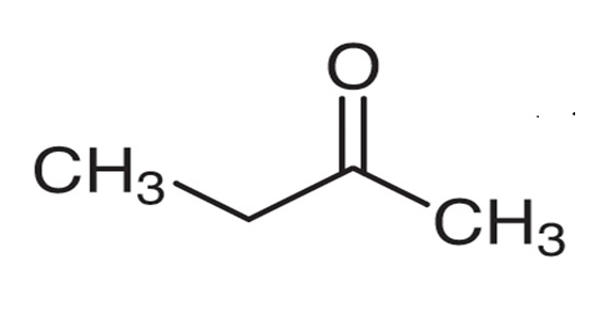 Butanone, also known as methyl ethyl ketone (MEK), is an organic compound with the formula CH3C(O)CH2CH3. It is a colorless liquid at room temperature. This colorless liquid ketone has a sharp, sweet odor reminiscent of acetone. It is relatively fragrant, punctuated by a slightly sharp minty or acetone-like smell. Its melting point is -86.67 C (-124 F) and its boiling point is 79.59 C (175.26 F).

It occurs as a natural product. It is made by some trees and found in some fruits and vegetables in small amounts. It is produced industrially on a large scale, but occurs in nature only in trace amounts. It is also released to the air from car and truck exhausts. It is partially soluble in water, and is commonly used as an industrial solvent. It is an isomer of another solvent, tetrahydrofuran.

Butanone is an important component of the distillate (dry alcohol) of dry-dried wood. Industrially made from sec-butanol, butane, etc. It may be produced by oxidation of 2-butanol. The dehydrogenation of 2-butanol using a catalyst is catalyzed by copper, zinc, or bronze:

This is used to produce approximately 700 million kilograms yearly. The conversion of butene was about 95%, the yield of butanone was about 88%, and the obtained reaction solution was purified by distillation or the like to obtain a finished product. Other syntheses that have been examined but not implemented include Wacker oxidation of 2-butene and oxidation of isobutylbenzene, which is analogous to the industrial production of acetone. This process is simple, but the equipment is heavily corroded and heavy metals are required as catalysts.  The cumene process can be modified to produce phenol and a mixture of acetone and butanone instead of only phenol and acetone in the original.

Both liquid-phase oxidation of heavy naphtha and the Fischer-Tropsch reaction produce mixed oxygenate streams, from which 2-butanone is extracted by fractionation.