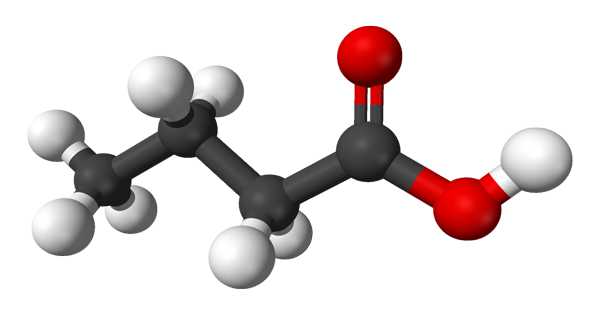 Butyric acid, also known as butanoic acid in the scientific community, is a straight-chain alkyl carboxylic acid with the chemical formula CH3CH2CH2CO2H. It is an organic compound that is responsible for the sour butter smell. The COOH group indicates that it is a carboxylic acid. It can be found in animal fats as well as vegetable oils. However, the amount of butyric acid found in foods like butter and ghee is insignificant in comparison to the amount produced in your gut.

It’s an oily, colorless liquid with a strong odor. An isomer is isobutyric acid (2-methylpropanoic acid). Butyrates and butanoates are butyric acid salts and esters. Although the acid itself is not common in nature, its esters are. It is a common industrial chemical that plays an important role in mammalian digestion.

Butyric acid is a straight-chain saturated fatty acid that is butane in which one of the terminal methyl groups has been oxidized to a carboxy group. It appears as a colorless liquid with a penetrating and unpleasant odor.

On a large scale, butyric acid is produced through the fermentation of starch or sugar. It is most commonly found in butter, but it can also be found in some fruits. It is also synthesized through the fermentation of various carbohydrates and used as a flavoring agent in a variety of food products. It is also used to make plastics, plasticizers, surfactants, and textile auxiliaries.

Butyrate is currently produced commercially via petrochemical routes via the oxidation of propylene-derived butyraldehyde via oxosynthesis. Because of the low productivity and butyrate concentration in the fermentation broth, biotechnological production of butyric acid is not commercially competitive.

Butyric acid triglycerides make up 3–4% of butter. Butyric acid is liberated from the glyceride by hydrolysis when butter becomes rancid. It belongs to the fatty acid subgroup known as short-chain fatty acids. Butyric acid is a common carboxylic acid that reacts with bases and affects a wide range of metals. It can be found in bovine milk, breast milk, butter, parmesan cheese, body odor, vomit, and as a byproduct of anaerobic fermentation (including in the colon).

It has a butter-like flavor and an unpleasant odor. Dogs and other mammals with good scent detection abilities can detect it at 10 parts per billion, whereas humans can detect it only at concentrations greater than 10 parts per million. It is used as a flavoring agent in food manufacturing.

Butyric acid is one of the two primary endogenous agonists of the human hydroxycarboxylic acid receptor 2 (HCA2), which is a Gi/o-coupled G protein-coupled receptor.

Butyric acid has many applications in various industries, and there is currently a lot of interest in using it as a precursor to biofuels.

Butyric acid esters with low molecular weight, such as methyl butyrate, have mostly pleasant aromas or tastes. As a result, they are used as food and fragrance additives.

It has also been used as a fishing bait additive due to its strong odor. Many commercially available flavors used in carp (Cyprinus carpio) baits use butyric acid as their ester base; however, it is unclear whether the butyric acid itself or the substances added to it attracts fish. Butyric acid, on the other hand, was one of the few organic acids that was shown to be palatable to both tench and bitterling.