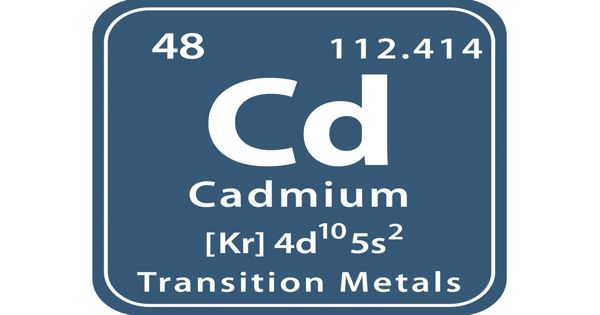 Cadmium is a chemical element with the symbol Cd and atomic number 48. It is usually found as a mineral combined with other elements such as oxygen (cadmium oxide), chlorine (cadmium chloride), or sulfur (cadmium sulfate, cadmium sulfide). It is a soft metal that is easily cut with a knife. The average concentration of cadmium in Earth’s crust is between 0.1 and 0.5 parts per million (ppm).

It was discovered in 1817 simultaneously by Stromeyer and Hermann, both in Germany, as an impurity in zinc carbonate. It is very soft and can almost be scratched with a fingernail. It is found most commonly in ores of zinc.

Cadmium is a silvery metal with a bluish tinge to its surface. It is an element and is classified as a transition metal.

This soft, silvery-white metal is chemically similar to the two other stable metals in group 12, zinc and mercury. It is soluble in acids but not in alkalis. It is similar in many respects to zinc but it forms more complex compounds.

Cadmium can mainly be found in the earth’s crust. It occurs as a minor component in most zinc ores and is a byproduct of zinc production. It always occurs in combination with zinc. Cadmium also consists in the industries as an inevitable by-product of zinc, lead, and copper extraction.

Cadmium was used for a long time as a corrosion-resistant plating on steel, and cadmium compounds are used as red, orange, and yellow pigments, to color glass, and to stabilize plastic. It has been used particularly to electroplate steel where a film of cadmium only 0.05 mm thick will provide complete protection against the sea.

Cadmium use is generally decreasing because it is toxic and nickel-cadmium batteries have been replaced with nickel-metal hydride and lithium-ion batteries. It does not corrode easily and has many uses, including batteries, pigments, metal coatings, and plastics. One of its few new uses is in cadmium telluride solar panels. It is a poison and is known to cause birth defects and cancer. As a result, there are moves to limit its use.