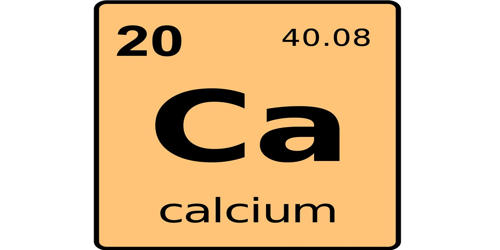 Calcium is a chemical element with the symbol Ca and atomic number 20. It is one of the alkaline-earth metals of Group 2 (IIa) of the periodic table. As an alkaline earth metal, calcium is a reactive metal that forms a dark oxide-nitride layer when exposed to air. Its physical and chemical properties are most similar to its heavier homologues strontium and barium. The metal is trimorphic, harder than sodium, but softer than aluminium. It is the fifth most abundant element in Earth’s crust and the third most abundant metal, after iron and aluminium. Itis an alloying used in the production of alluminium, beryllium, copper, lead, and magnesium alloys. The most common calcium compound on Earth is calcium carbonate, found in limestone and the fossilized remnants of early sea life; gypsum, anhydrite, fluorite, and apatite are also sources of calcium.

Calcium’s melting point is 850°C (1,560°F) and its boiling point is 1,440°C (2,620°F). It has a density of 1.54 grams per cubic centimeter. It is a moderately active element. Calcium reacts with the halogens— fluorine, chlorine, bromine, iodine, and astatine. Calcium also reacts readily with cold water, most acids, and most nonmetals, such as sulfur and phosphorus. For example, calcium reacts with sulfur.

Some calcium compounds were known to the ancients, though their chemistry was unknown until the seventeenth century. Pure calcium was isolated in 1808 via electrolysis of its oxide by Humphry Davy, who named the element. Calcium is the most abundant metal and the fifth-most abundant element in the human body. Calcium ions solved in water form deposits in pipes and boilers and when the water is hard, that is, when it contains too much calcium or magnesium.  It is the most abundant metallic element in the human body and the fifth most abundant element in Earth’s crust. Calcium ions outside cells are important for maintaining the potential difference across excitable cell membranes, protein synthesis, and bone formation.

Calcium compounds are widely used in many industries: in foods and pharmaceuticals for calcium supplementation, in the paper industry as bleaches, as components in cement and electrical insulators, and in the manufacture of soaps. The metal is used in aluminium alloys for bearings, as a helper in the bismuth removal form lead, as well as in controlling graphitic carbon in melted iron. It is also used as an alloying agent for aluminum, beryllium, copper, lead, and magnesium alloys.