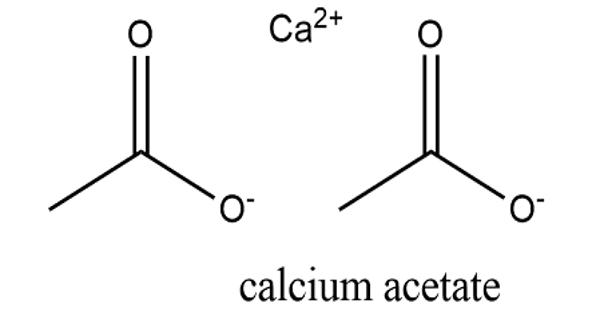 Calcium acetate is a chemical compound that is a calcium salt of acetic acid. It consists of four carbon atoms, six hydrogen atoms, one calcium atom, and four oxygen atoms. Calcium is a mineral essential for many cellular functions including nerve impulse transmission, muscle contraction, cardiac function, bone formation, and capillary and cell membrane permeability. It has the formula Ca(C2H3O2)2. It is administered orally to prevent or treat calcium deficiency and to treat hyperphosphatemia due to its phosphate-binding properties.

Its standard name is calcium acetate, while calcium ethanoate is the systematic name. An older name is acetate of lime. The anhydrous form is very hygroscopic; therefore the monohydrate [Ca(CH3COO)2•H2O] is the common form. It is used, commonly as a hydrate, to treat hyperphosphataemia (excess phosphate in the blood) in patients with kidney disease. Moreover, it is mainly used in producing various medicines, food additive, sequestrate, buffer, etc.

It is colourless to white crystalline solid which has a slight odour of acetic acid. It dissolves in water and alcohol and is insoluble in benzene and acetone.

Calcium acetate can be prepared by soaking calcium carbonate (found in eggshells, or in common carbonate rocks such as limestone or marble) or hydrated lime in vinegar:

Furthermore, this chemical can be gathered by soaking calcium carbonate in a vinegar solution. Since both reagents would have been available pre-historically, the chemical would have been observable as crystals then. Calcium acetate has not been found yet as a free compound in nature.

Pure Ca acetate is yet unknown among minerals. Calclacite – calcium acetate chloride pentahydrate – is listed as a known mineral, but its genesis is likely anthropogenic and it may soon be discredited. In its anhydrous form is strongly hygroscopic and therefore occurs as monohydrate in its common form.