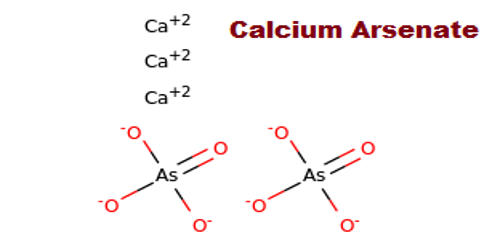 Calcium arsenate is the inorganic compound with the formula Ca3(AsO4)2. It was registered for food use as an insecticide on various field and orchard crops. It is a pentavalent form of inorganic arsenic. A colorless solid, it was originally used as a pesticide and as a germicide. It normally exists as white crystals with no discernable odor. It is highly soluble in water, as compared with lead arsenate, which makes it more toxic. 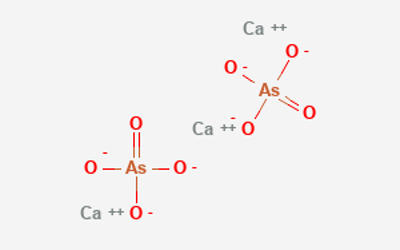 In the 1920s, it was made in large vats by mixing calcium oxide and arsenic oxide. In the United States, 1360 metric tons were produced in 1919, 4540 in 1920, and 7270 in 1922. The composition of commercially available calcium arsenate varies from manufacturer to manufacturer. A typical composition is 80-85% of Ca3(AsO4)2 a basic arsenate probably with a composition of 4CaO.As2O5 together with calcium hydroxide and calcium carbonate.

Use as a herbicide

It was registered as a foliar insecticide on various small fruits and berries and certain vegetable crops. It was once a common herbicide and insecticide. It was applied at a rate of 4.5 lb. active ingredient/acre. 38,000,000 kilograms were reported to be produced in 1942 alone, mainly for the protection of cotton crops. Its high toxicity led to the development of DDT. It was applied to the soil near plants for protection.