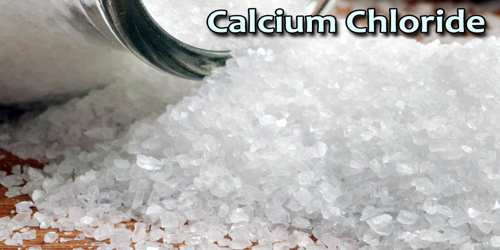 Calcium chloride is a white crystalline salt that attracts water very strongly. It is used in refrigeration and is spread on roads to melt ice and control dust. It is an ionic compound of calcium and chlorine. It is highly soluble in water and it is deliquescent. It is a salt that is solid at room temperature, and it behaves as a typical ionic halide. Its chemical formula CaCl2. Calcium chloride is commonly encountered as a hydrated solid with generic formula CaCl2(H2O)x, where x = 0, 1, 2, 4, and 6. These compounds are mainly used for de-icing and dust control. Because the anhydrous salt is hygroscopic, it is used as a desiccant.

It has several common applications such as brine for refrigeration plants, ice and dust control on roads, and in cement. It can be produced directly from limestone, but large amounts are also produced as a by-product of the Solvay process. Because of its hygroscopic nature, it must be kept in tightly-sealed containers.

Properties and Functions of Calcium Chloride Calcium chloride is found as an odorless white powder, granules or flakes. It has a density of 2.15 g/mL, melting point of 782 °C and a high boiling point over 1600 °C.

Calcium chloride serves as a firming agent in prepared foods, including canned fruits and vegetables and tofu. These firming properties also help in the production of cheese, according to calcium chloride manufacturer Muby Chemicals. It makes the curds larger and firmer in store-bought milk, and a single teaspoon of calcium chloride solution can treat 2 gallons of milk. Other uses include as an additive to pickle brine, which gives it the salty taste without loading it with sodium, and as an ingredient in sports drinks.

Calcium chloride has several similar uses as sodium chloride, and it is used as a food additive, food preservative, for de-icing roads in winter, and as brine in refrigeration plants. It is also used as a swimming pool chemical, in water treatment plants, and for desiccating purposes. It also has applications in metallurgy, oil-well drilling, and rubber, paper, dye and paint industries. The U.S. Food and Drug Administration (FDA) reports that a review of it and other calcium compounds found in food “provides no evidence that suggests possible untoward effects” at the levels at which manufacturers use it. It is now known that calcium chloride actually has several harmful effects on humans and pets alike. Some of those harmful effects include:

While most of calcium chloride’s food uses are for preservative and texture purposes, it does provide health benefits in one use: sports drinks. In these, calcium chloride is one of several ingredients that act as electrolytes, ions that conduct electrical activity and help our body maintain fluid balance as well as proper muscle and nerve functions. As an electrolyte, calcium helps maintain bone health and prevent muscle spasms, and chloride helps keep our heartbeat regular. The ACE (American Council on Exercise) recommends drinking a sports drink with electrolytes before exercise sessions lasting longer than an hour.