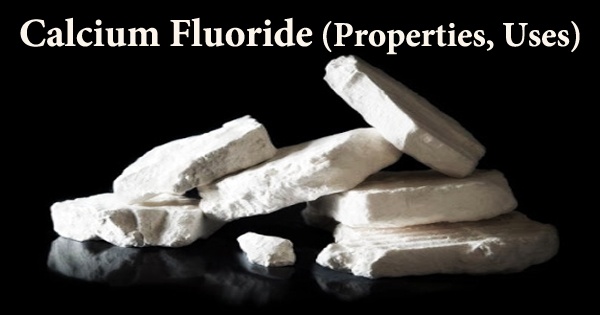 Calcium fluoride is an ionic crystal with a simple cubic array of fluorine anions and calcium cations in half of the cubic sites. It’s an ionic compound made up of Ca2+ and F– ions that’s insoluble. It has the formula CaF2 and is an inorganic compound of the elements calcium and fluorine. It can be found in nature as the mineral “Fluorite” (also known as fluorspar) and as “Blue-John.” This odorless gray powder or granules is the source of the majority of the world’s fluorine.

Fluorite or fluorspar is a mineral that contains calcium fluoride. It is the most important source of fluorine and its derivatives. The relative density is 3.18, the melting point is 1423oC, and the boiling point is at 2500oC. The solubility in water is minimal, 100g water can dissolve only 0.0016g at 18 ℃, it is insoluble in acetone, but soluble in hydrochloric acid, hydrofluoric acid, sulfuric acid, nitric acid and ammonium salt solution. The fluorite structure is formed when the compound crystallizes in a cubic motif.

It cannot react with dilute acid, but it can react with highly concentrated sulfuric acid to produce hydrofluoric acid. When dissolved in aluminum and iron salts (Fe3 +) solution, it can create a complex. Fluorite is a mineral that is renowned for its glassy brilliance and wide range of hues. Natural calcium fluoride, also known as fluorite or fluorspar, is a mineral that can be found in a variety of colors, including gray, yellow, green, purple, and other hues. It can also be colorless, transparent, brittle, and has a relative density of 3.01~3.25. It has a significant fluorescence phenomenon.

Ca2+ centers are eight-coordinated, centered in an eight-center cube of F– centers. Each F– center is connected to four Ca2+ centers in a tetrahedron form. Fluorite’s color spectrum is incredible, starting with the signature purple and progressing to blue, green, yellow, colorless, brown, pink, black, and reddish-orange. Only quartz comes close in terms of color range. The mineral is typically intensely colored because to the presence of F-centers, even though ideally packed crystalline samples are colorless. The same crystal structure is found in numerous ionic compounds with formula AB2, such as CeO2, cubic ZrO2, UO2, ThO2, and PuO2.

Calcium fluoride is a source of fluorine and a component of the hydrofluoric acid system and fluoride; it is also used in the production of glass, enamel, and glaze. Fluorite is primarily utilized in metallurgy as a flux, though very pure fluorspar can be used to manufacture specialty lenses. Dental issues can be avoided by drinking water that contains (1~1.5) × 10-6 calcium fluoride. Fluorite is a mineral that is plentiful, ubiquitous, and primarily used as a precursor to HF. As a result, there is minimal incentive for CaF2 to be produced industrially. Calcium carbonate is treated with hydrofluoric acid to obtain high purity CaF2:

Pure calcium fluoride is used to fluoridate drinking water and as a catalyst in dehydration and dehydrogenation. It can also be utilized in the manufacture of iron and steel, chemicals, glass, and ceramics. The pure product can be utilized as a dehydration and dehydrogenation catalyst. The main source of hydrogen fluoride, a commodity chemical used to make a variety of products, is naturally occurring CaF2. Calcium fluoride can be made by combining soluble calcium salts (calcium carbonate or calcium hydroxide) with sodium fluoride or hydrofluoric acid, ammonium fluoride.

The fluorite deposits found in China are primarily mined using underground mining methods, such as shallow open-pit mining and underground deep mining, with the ore body tilting vertically and extending far. The shallow hole shrinkage method is used in the mining process. As a fluoride source, calcium fluoride in the fluorite state is of major commercial relevance. The action of strong sulfuric acid liberates hydrogen fluoride from the mineral:

Calcium Fluoride is relatively inert and non-hygroscopic. It has a strong thermal and mechanical stress resistance and may be easily produced into a range of detector geometries. Even after a month of exposure to 100% relative humidity at ambient temperature, polished surfaces do not fog. Polished surfaces will not deteriorate under regular operating circumstances. Calcium fluoride surfaces deteriorate in the presence of moisture at temperatures above 600 °C.

The majority of chemicals in this class are water insoluble or only slightly soluble. If the solution is soluble in water, it is usually neither strongly acidic nor strongly basic. Calcium Fluoride, on the other hand, is a good material for detecting β-particles due to its low atomic number and low backscattering. It’s utilized in thermal imaging systems, spectroscopy, telescopes, and excimer lasers to make optical components like windows and lenses.

Because it is transparent in these wavelength ranges (approximately 0.15 to 9μm) and has an extraordinarily low refractive index, calcium fluoride is often utilized as a window material for both infrared and ultraviolet wavelengths. It’s also employed as a flux in the melting and liquid processing of iron, steel, and composite materials. Its action is based on the fact that it has a comparable melting point to iron, as well as the capacity to dissolve oxides and moist oxides and metals. It is transparent throughout a wide range of frequencies, from ultraviolet (UV) to infrared (IR). Because of its low refractive index, it does not require anti-reflection coatings.