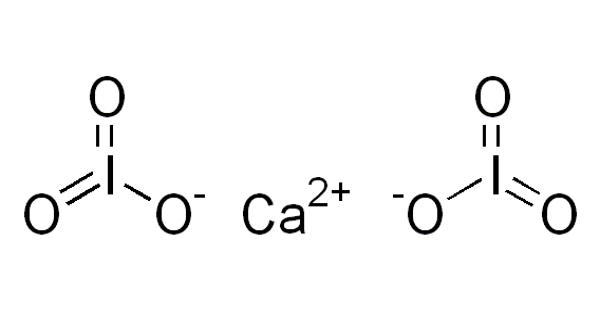 Iodates are a class of chemical compounds containing a IO3– group. An iodate is a conjugate base of iodic acid. Calcium iodates are inorganic compounds composed of calcium and iodate anion. Two forms are known, anhydrous Ca(IO3)2 and the hexahydrate Ca(IO3)2(H2O). Both are colorless salts that occur naturally as the minerals called lautarite and bruggenite, respectively.  It is used as a dusting powder and, in lotion and ointment, as an antiseptic and deodorant.

A third mineral form of calcium iodate is dietzeite, a salt containing chromate with the formula Ca2(IO3)2CrO4. The only known role of Calcium iodate in the metabolism is its incorporation into the thyroid hormones, thyroxine, and triiodothyronine as well as the precursor iodothyrosines. Both hormones have multiple functions as regulators of cell activity (energy metabolism) and growth and as transmitters of nervous stimuli and play an important role in brain development.

Lautarite, described as the most important mineral source of iodine, is mined in the Atacama Desert. Processing of the ore entails a reduction of its aqueous extracts with sodium bisulfite to give sodium iodide. Via a comproportionation reaction, the sodium iodide is combined with the iodate salt to produce elemental iodine. For a saturated solution of calcium iodate, if you can determine either the molar concentration of calcium ion or the molar concentration iodate ion, the solubility product constant can be found.

The use of calcium iodate anhydrous as sources of iodine is considered safe for all animal species/categories when used up to the currently authorised maximum content of total iodine in complete feed.