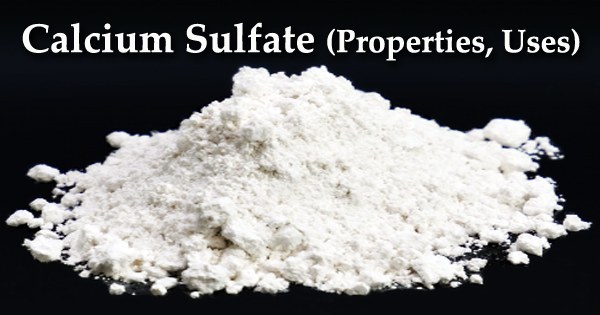 Calcium sulfate (or calcium sulphate) is a colorless, crystalline substance that is odorless; its hydrates are inorganic compounds with the formula CaSO4. It’s a dense grayish-white powder that can be found in both anhydrous (anhydrite) and hydrated (gypsum) forms in nature, and it’s also a result of many chemical reactions. It is utilized as a desiccant in the form of γ-anhydrite (the anhydrous form). One hydrate is known as plaster of Paris, whereas another is found in nature as the mineral gypsum.

Crystals might be blue, gray, or reddish in color, or they can be brick red. It has a wide range of applications in industry. All of the forms are white solids that are water insoluble. Permanent hardness in water is caused by calcium sulfate. It has a variety of industrial applications, including as a source of sulfur and sulfuric acid, as a soil conditioner, in paints, dyes, and polishes, and as a food additive.

Calcium sulfate can be made by adding a soluble calcium salt to a sodium sulfate solution:

The molecule has three stages of hydration, each of which corresponds to various crystalline structures and minerals found in nature:

Because of its particular capacity to stimulate osteoneogenesis, calcium sulfate (plaster of Paris) has been proposed for use in the repair of bone deformities. Plaster of Paris can be utilized as a bone alloplast and histologically examined. These uses take advantage of the property that when calcium sulfate is powdered and calcined, it produces a moldable paste that hardens as crystalline calcium sulfate dihydrate when hydrated.

When heated to 180 degrees Celsius (356 degrees Fahrenheit), the almost water-free form known as -anhydrite (CaSO4nH2O, where n = 0 to 0.05) is formed. The totally anhydrous form known as -anhydrite or “natural” anhydrite is generated when heated over 250 °C. Unless very finely crushed, natural anhydrite does not react with water over geological timeframes. The use of plaster of Paris as an alloplast and assessment of its osteoneogenic capacity when implanted in the frontal sinus of dogs was further supported by sinus roentgenograms and technetium Tc 99m medronate bone scanning; complete bone regeneration was demonstrated in six dogs within four to six months.

Plaster of Paris can be used in surgery for bone reconstruction in the head and neck. Calcium sulfate dihydrate contains around 23% calcium, while calcium sulfate anhydrous has roughly 29% calcium. It’s used as a filler and baking powder for standardizing purposes, among other things; in canned potatoes, tomatoes, carrots, lima beans, and peppers as a firming agent; in dough as a calcium ion source.

Calcium sulfate has been used in dentistry for a long time. It’s been employed as a graft material and graft binder/extender in bone regeneration, as well as a barrier in guided tissue regeneration. It’s also employed as a coagulant in goods like “tofu,” a type of “bean curd.” Due to impregnation with cobalt chloride, which works as a moisture indicator, it appears blue or pink when offered as a colorindicating version under the name “Drierite.” Chemical gypsum requires fewer than 0.5 percent residual chloride, fluoride, and phosphate.

Natural gypsum and anhydrite, which exist as evaporites in numerous places around the world, are the principal sources of calcium sulfate. Open-cast quarrying or deep mining can both be used to obtain them. Natural gypsum production in the world is estimated to be over 127 million tonnes per year. 19.1 million tons of crude gypsum was calcined for gypsum products, and 5.4 million tons was used mostly as a cement retarder or as agricultural land plaster, out of a total supply of 24.5 million tons, including 800,000 tons of byproduct gypsum.