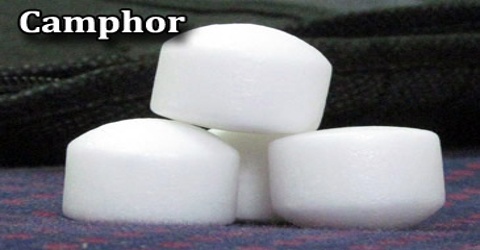 Camphor is a white, gumlike, crystalline compound that has a strong odor. Camphor is volatile and is used as an insect repellent and in making plastics and explosives. Its chemical formula is C10H16O. It occurs in some other related trees in the laurel family, notably Ocotea usambarensis. The oil in rosemary leaves (Rosmarinus officinalis), in the mint family, contains 10 to 20% camphor, while camphorweed (Heterotheca) only contains some 5%. Camphor can also be synthetically produced from oil of turpentine. The word camphor derives from the French word camphre, itself from Medieval Latin camfora, from Arabic kafur, ultimately from Sanskrit, कर्पूरम् / karpūram. Camphor was well known in ancient India during the Vedic period. In Old Malay it is known as kapur Barus, which means “the chalk of Barus”.

Production and Uses of Comphor

Comphor is found in the wood of the camphor laurel (Cinnamomum camphora), a large evergreen tree found in Asia (particularly in Sumatra and Borneo islands, Indonesia) and also of the unrelated kapur tree, a tall timber tree from the same region. In the 19th century, it was known that nitric acid oxidizes camphor into camphoric acid. When the Pine trees are cut, they exude a resin which is called Oleo-Pine Resin.  This resin when heated splits into two components namely Rosin and Pine Turpentine.  Pine Turpentine contains many ingredients like Alpha Pinene, Beta Pinene and other terpene hydrocarbons. The Camphor so produced, is then sublimed or flaked, to arrive at the final finished product of crystals or flakes of camphor. Each of the reactions is stoichiometric and go as per the Chemical Equations. Pine Turpentine from each source varies in content.  Thus the ones from China and Brazil have more than > 80% Alpha Pinene and hence the most suited for camphor production.  Indonesian varieties have > 70%, Russian >60% and the Indian varieties <30%.

Camphor is used topically to increase local blood flow and as a “counterirritant,” which reduces pain and swelling by causing irritation. It is important not to apply camphor to broken skin, because it can enter the body quickly and reach concentrations that are high enough to cause poisoning. People use camphor topically to relieve pain and reduce itching. It has also been used to treat fungal infections of the toenail, warts, cold sores, hemorrhoids, and osteoarthritis. Camphor also used to be made by distilling the bark and wood of the camphor tree. Today, camphor is chemically manufactured from turpentine oil. It is used in products such as Vicks VapoRub. Some people use camphor topically to treat respiratory tract diseases and to treat heart disease symptoms. Camphor is also used topically as an eardrop, and for treating minor burns.