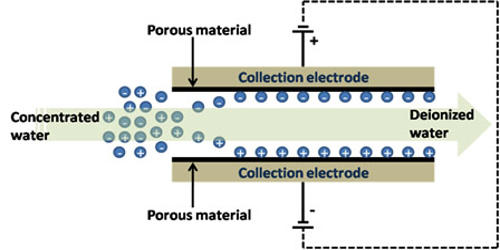 Capacitive deionization (CDI) is an emerging and promising new technology for the removal of ionic as well as polarizable species from water. It is a technology to deionize water by applying an electrical potential difference over two electrodes, which are often made of porous carbon. It is a process system that removes charged species from water using an electrical potential difference between a pair of electrodes made often of porous carbon. Anions, ions with a negative charge, are removed from the water and are stored in the positively polarized electrode. Likewise, cations (positive charge) are stored in the cathode, which is the negatively polarized electrode. A positively charged electrode captures the water’s negatively charged anions while a negatively charged electrode captures the water’s positively charged cations. The removal selectivity of Capacitive Deionization processes is governed by the characteristics of the feed contaminant, operating conditions (e.g., applied voltage), and electrode properties. The technology works on the principle of electroabsorption of ions at the surface of electrically charged electrodes, generally made of porous carbon materials

Today, CDI is mainly used for the desalination of brackish water, which is water with a low or moderate salt concentration (below 10 g/L). Capacitive deionization (CDI) has attracted great attention as a promising desalination technology, and studies on CDI have increased significantly in the last ten years. Other technologies for the deionization of water are, amongst others, distillation, reverse osmosis, and electrodialysis. The technology works by passing the feed water between two porous electrodes, a cathode (+) and an anode (-). The charged particles separate from the feed water based on their charge. Advances in the technology have occurred through optimization of the electrode materials, the carbon materials, as well as in the architecture and operational modes of the systems.

Compared to reverse osmosis and distillation, CDI is considered to be an energy-efficient technology for brackish water desalination. It is an alternative to membrane-based technologies, having low operational cost, enhanced energy efficiency, and less water rejection. This is mainly because CDI removes the salt ions from the water, while the other technologies extract the water from the salt solution. The technology is based on ion electrosorption at the surface of a pair of electrically charged electrodes composed of highly porous carbon materials. However, there have been no guidelines for developing strategies involving CDI technology for specific applications. Useful applications for CDI include desalination, wastewater remediation, and water softening. In addition, CDI can be used to remove contaminants such as lead and copper from public water at the point of entry into homes.

Historically, CDI has been referred to as electrochemical demineralization, “electrosorb process for desalination of water”, or electrosorption of salt ions. The concept of CDI date back to the 1960s but the community of CDI has grown exponentially in the last two decade. It also goes by the names of capacitive desalination, or in the commercial literature as “CapDI”.