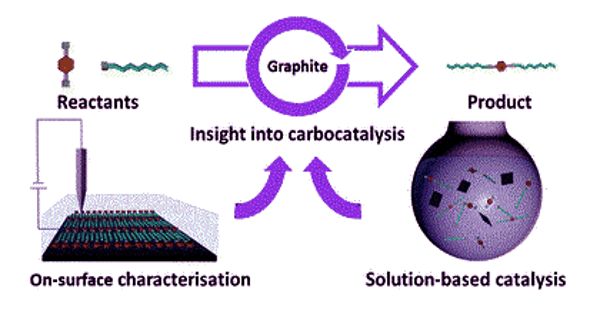 Carbocatalysis – a form of catalysis

Catalyst, in chemistry, is a substance that increases the rate of a reaction without itself being consumed. Carbocatalysis is a form of catalysis that uses heterogeneous carbon materials for the transformation or synthesis of organic or inorganic substrates. Catalytic processes have remarkably boosted the rapid industrialization in chemical production, energy conversion, and environmental remediation. The catalysts are characterized by their high surface areas, surface functionality, and large, aromatic basal planes. Most solid catalysts are metals or the oxides, sulfides, and halides of metallic elements and of the semimetallic elements boron, aluminum, and silicon.

Carbocatalysis holds a privileged position as a sustainable alternative to metal-based catalysis. It can be distinguishable from supported catalysis (such as palladium on carbon) in that no metal is present, or if metals are present they are not the active species. While the focus in solution-based catalytic processes generally lies on how the heterogeneous catalyst affects the solution composition, more attention has recently been given to the analysis of the carbon material itself.

One of the most common examples of carbocatalysis is the oxidative dehydrogenation of ethylbenzene to styrene discovered in the 1970s. Also in the industrial process of (non-oxidative) dehydrogenation of ethylbenzene, the potassium-promoted iron oxide catalyst is coated with a carbon layer as the active phase. As one of the emerging applications of carbocatalysis, metal-free nanocarbons have demonstrated promise as catalysts for green remediation technologies to overcome the poor stability and undesirable metal leaching in metal-based advanced oxidation processes. In another early example, a variety of substituted nitrobenzenes were reduced to the corresponding aniline using hydrazine and graphite as the catalyst. In general, catalytic action is a chemical reaction between the catalyst and a reactant, forming chemical intermediates that are able to react more readily with each other or with another reactant, to form the desired end product.

The discovery of nanostructured carbon allotropes such as carbon nanotubes, fullerenes, or grapheme promoted further developments. Metal-free heterogeneous carbon-based materials have the potential to facilitate a wide range of organic transformations in an economical and environmentally-friendly manner. Oxidized carbon nanotubes were used to dehydrogenate n-butane to 1-butene, and to selectively oxidize acrolein to acrylic acid. However, the mechanism of their action is often obfuscated by their ill-defined nature, so careful analysis of the reaction products is essential before they can be labelled “catalysts” in accordance with the IUPAC definition. Fullerenes were used in the catalytic reduction of nitrobenzene to aniline in the presence of H2.