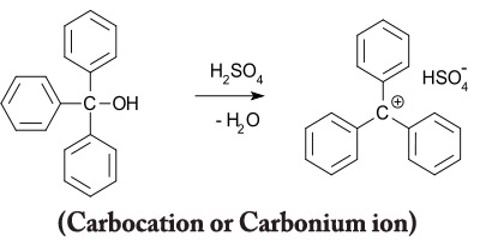 The orbitals of carbocations are generally sp2 hybridized so that the three full orbitals are arranged in a trigonal planar geometry about the carbon nucleus. The remaining p orbital is empty and will readily accept a pair of electrons from another atom. Because of the symmetry of this geometric arrangement, nucleophilic attack is equally favorable above or below the plane formed by the full orbitals. If the carbon bearing the positive charge is immediately adjacent to a carbon-carbon double bond, the carbocation is termed an allylic carbocation. ==Formation of Carbocations==y Carbocation intermediates are formed in three main types of reactions: additions to pi bonds, unimolecular eliminations, and unimolecular nucleophilic substitution. On a bridge head a positive carbon is rare. The 3-cyclopropyl carbocation is the most stable carbocation.

Three Fates of a Carbocation

Now we consider how carbocations behave in reaction mechanisms. Generally speaking, carbocations are unstable due to their open octets and positive charges. Thus, their reactions will be strongly influenced by filling the octet of the carbon bearing the positive charge, or at least making this positive charge more stable. There are three common mechanism pathways (or fates) by which carbocations may achieve this stability. These fates are (a) capture a nucleophile, (b) lose a proton to form a π bond, and (c) rearrange.

Capture a Nucleophile. The carbocation is electrophilic because it has a positive charge and (in most cases) a carbon atom with an open octet. The positive charge is neutralized when an electron pair is accepted and a new covalent bond is formed. By definition, a species that donates a pair of electrons to form a new covalent bond is a nucleophile. Because carbocations are very reactive, even weak nucleophiles such as water can be captured with ease.

Lose a proton to form a π bond. Accepting an electron pair from an adjacent bond to a hydrogen atom neutralizes the positive charge or fills the open octet and forms a new π bond. (The carbocation carbon now has four bonds and a full octet, so its formal charge is zero.) The hydrogen atom must be removed by a base, but because carbocations are generally very reactive species and very strongly driven to dispose of the positive charge even a weak base such as water or iodide ion can accomplish this deprotonation. Rearrangements that transform a carbocation into another of apparently equal stability are less common, but they do occur. So before invoking this kind or rearrangement ask yourself if a better rearrangement, or some other mechanism step, is possible. Rearrangement to a less stable carbocation is very unusual, but also does occur. This is the pathway of last very last resort. All other reasonable options must be ruled out first.