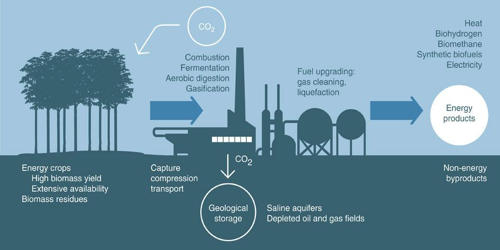 Cutting carbon pollution is essential for slowing global warming. Carbon dioxide removal (CDR), also known as greenhouse gas removal, usually refers to human-driven methods of removing carbon dioxide from the atmosphere and sequestering it for long periods, such that more carbon dioxide is sequestered in the process than emitted. These methods are also known as negative emissions technologies, as they offset greenhouse gas emissions from practices such as the burning of fossil fuels. Since the Industrial Revolution, humans have emitted more than 2,000 gigatons of carbon dioxide into the atmosphere.

This thickening blanket of heat-trapping greenhouse gases causes the global warming we experience today. If nothing changes, climate impacts such as forest fires, stifling heat waves and damaging sea level rise will only continue to intensify. The goal of international climate policy is to prevent “dangerous climate change,” which for many years has been cashed out in terms of limiting the average global temperature rise to 2°C above preindustrial levels.

How can carbon dioxide be removed –

There are a variety of CDR strategies, all in different stages of development, and varying in cost, benefits, and risks. CDR methods include afforestation, agricultural practices that sequester carbon in soils, bio-energy with carbon capture and storage, ocean fertilization, enhanced weathering, and direct air capture when combined with storage. CDR approaches that employ trees, plants, and soil to absorb carbon have been used at large scale for decades; other strategies that rely more on technology are mostly at the demonstration or pilot stages. To assess whether net negative emissions are achieved by a particular process, a comprehensive life cycle analysis of the process must be performed. CDR is not a substitute for rapidly reducing greenhouse gas emissions, which is essential under any scenario. he climate change that the planet is currently undergoing is caused by increased concentrations of greenhouse gases (GHGs), most notably carbon dioxide, in the atmosphere. These technologies are not a substitute for reducing emissions, and they require much more research and development before they can be deployed broadly.

Alternatively, some sources use the term “carbon dioxide removal” to refer to any technology that removes carbon dioxide, such as direct air capture, but can be implemented in a way that causes emissions to increase rather than decrease over the lifecycle of the process. Scientists are working on ways to suck CO2 from the air and permanently store it underground or use it as a raw material for industrial products.