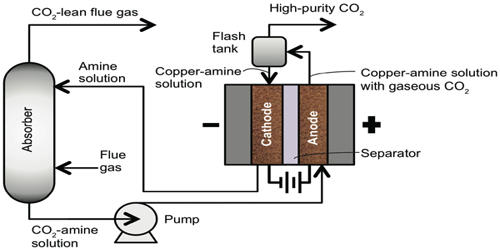 Carbon dioxide Scrubber removes carbon dioxide from the air. A carbon dioxide scrubber is a piece of equipment that absorbs carbon dioxide (CO2). It is used to treat exhaust gases from industrial plants or from exhaled air in life support systems such as rebreathers or in spacecraft, submersible craft, or airtight chambers. Carbon dioxide scrubbers are also used in controlled atmosphere (CA) storage. They have also been researched for carbon capture and storage as a means of combating global warming. Most of the technologies we have looked at focus on removing the gas where it is developed in high quantities, for example in the exhaust gases produced by coal power stations.

To produce energy, most power plants burn coal (or another fossil fuel) in the air to create steam. The steam turns a turbine, which generates electricity. Aside from steam, though, a hodgepodge of flue gases is also created and released into the atmosphere. Many of those extraneous emissions are greenhouse gases that contribute to the greenhouse effect.

How a CO2 Scrubber Works –

While there are many prototypes of CO2 scrubbers, most use similar technology to remove carbon dioxide from the air. Although the technology to create the CO2 scrubber is advanced, the function of the machine is easy to follow.

While it is difficult to determine whether or not the CO2 scrubber will achieve widespread use, such technologies could be useful in reducing the carbon already in the atmosphere. The research is significant because air capture technology is the only way to capture CO2 emissions from transportation sources such as vehicles and airplanes. These so-called diffuse sources represent more than half of the greenhouse gases emitted on Earth.