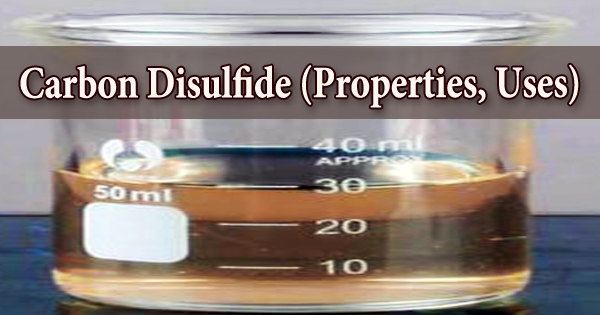 Carbon disulfide (CS2), also known as carbon bisulfide, was first produced in the mid-twentieth century by reacting charcoal with sulfur vapor at temperatures of 750–1000 oC. The molecule is commonly employed as an organic chemistry building block as well as an industrial and chemical non-polar solvent. It has a strong unpleasant odor and appears as a clear colorless to light yellow volatile liquid. combustible across a large vapor/air concentration range; boiling point 46° C; flashpoint -22°F (1% -50%).

Although the chemical has an ether-like odor, commercial quantities are often contaminated with foul-smelling contaminants. It’s a colorless, poisonous, extremely volatile, and flammable liquid chemical compound that’s utilized in the production of viscose rayon, cellophane, and carbon tetrachloride in huge quantities. Smaller quantities are utilized in solvent extraction operations or transformed into other chemical products, such as rubber vulcanization accelerators or agents used in ore concentration flotation processes.

Carbon disulfide (carbon bisulfide; CS2; CASRN 75-15-0) is a white liquid with a pleasant aromatic odor comparable to chloroform that evaporates easily at ambient temperature. Volcanic eruptions and wetlands both emit small quantities of carbon disulfide. Carbon (or coke) and sulfur were formerly combined at high temperatures to make CS2.

Vapors may be easily ignited using the heat of a standard light bulb. Water-insoluble and denser (10.5 lb/gal) than water. As a result, it sinks in water since vapors are heavier than air. Natural gas is used as the carbon source in the presence of silica gel or alumina catalysts in a lower-temperature process that only requires 600°C:

The process is similar to that of methane combustion. Carbon disulfide, in its impure commercial and reagent form, is a yellowish liquid with a terrible odor. It can be detected by odor at around 1 ppm, but the sense of smell fatigues quickly, thus smelling is ineffective as a warning mechanism. For many years, carbon disulfide was made by reacting charcoal with sulfur vapor at temperatures ranging from 750° to 1,000° C (1,400° to 1,800° F), but by the mid-twentieth century, that method had been surpassed, particularly in the United States.

It’s used in the production of rayon and cellophane, as well as flotation agents and as a solvent. Carbon disulfide production/consumption worldwide is over one million tonnes, with China consuming 49% and India 13%, mostly for the manufacture of rayon fiber. In 2007, the United States produced 56,000 tonnes. At 20 °C (68 °F), it has a vapor pressure of 297mmHg and a solubility in water by weight of 0.3%. Within a few days of being released into the atmosphere, carbon disulfide will decompose into simpler molecules.

Pure carbon disulfide is a colorless liquid that has a nice odor similar to chloroform. Most industrial operations utilize impure carbon disulfide, which is a yellowish liquid with an awful odor similar to decaying radishes. It’s made by heating sulfur vapor with charcoal and then condensing the resulting vapors. It can also be made by combining sulfur with natural gas or petroleum fractions and heating them together.

Phosphorus, sulfur, selenium, bromine, iodine, lipids, resins, rubber, and asphalt are all soluble in carbon disulfide. Single-walled carbon nanotubes have been purified using this method. At normal temperature, carbon disulfide vaporizes, and the vapor is more than twice as dense as air. It readily bursts in the air and also easily catches fire. Carbon disulphide poisoning is common in industrial settings. Carbon disulphide, carbonyl sulphide, and hydrogen sulphide are released in greater quantities by industries linked with coal gasification facilities.

Carbon disulfide is found in tiny levels in nature in gases discharged to the earth’s surface, such as in volcanic eruptions or over marshes. Carbon and sulfur are combined at extremely high temperatures to produce commercial carbon disulfide. It’s a common industrial chemical used to make viscose rayon fibers in huge numbers. CS2 is a highly flammable substance. According to this ideal stoichiometry, its burning produces sulfur dioxide:

In reality, emissions discharged into the air by viscose factories are the primary source of carbon disulphide pollution both inside and outdoors. A one-carbon molecule, carbon disulfide is an organosulfur chemical. While nucleophile reactions with CO2 are extremely reversible, and only very strong nucleophiles can be separated as products, interactions with CS2 are thermodynamically more favorable, permitting the production of products with less reactive nucleophiles.

The autoignition temperature of carbon disulphide (125°C) is exceptionally low. When heated, it may ignite or even explode. In mineral processing, xanthates and related thioxanthates (produced from the treatment of CS2 with sodium thiolates) are employed as flotation agents. Azides, ethylamine, ethylenediamine, and ethylene imine react strongly. When heated to breakdown, it emits very hazardous sulfur oxide fumes.

Apparently, a tiny amount of carbon disulfide is transformed to hydrogen sulfide, which is quickly reduced to sulfate and eliminated in the urine. Although the process is mediated by the enzyme carbon disulfide hydrolase, carbon disulfide does not readily hydrolyze. Inhalation of fumes is the most common method of exposure. It can also enter the body by absorption through the skin. Narcosis is the harmful impact of a single exposure. When carbon disulfide is reduced with sodium, sodium 1,3-dithiole-2-thione-4,5-dithiolate and sodium trithiocarbonate are formed:

Carbon disulfide was once employed as a pesticide, and it was generally combined with carbon tetrachloride in a 20/80 ratio. Insects and rodents were exterminated from whole boxcars of wheat, maize, rye, and other grains with this combination. It’s used to make organosulfur compounds like metam sodium, xanthates, and dithiocarbamates, which are useful in extractive metallurgy and rubber chemistry. Carbon disulfide is also employed as a soil disinfectant against insects and nematodes, as well as an insecticide for fumigating cereals, nursery stock, and fresh fruit preservation.