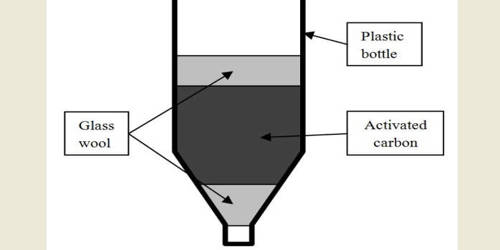 Carbon filtering works by adsorption, in which pollutants in the fluid to be treated are trapped inside the pore structure of a carbon substrate. The substrate is made of many carbon granules, each of which is itself highly porous. When the water flows through active carbon filters the chemicals stick to the carbon resulting in purer water output. As a result, the substrate has a large surface area within which contaminants can be trapped. For example, sodium, microbes, fluoride, and nitrates cannot be removed with AC filtration. Activated carbon is typically used in filters, as it has been treated to have a much higher surface area than non treated carbon. One gram of activated carbon has a surface area in excess of 3,000 m2 (32,000 sq ft). Contaminated air enters the filtration system, passes through the active carbon, undergoes adsorption, and leaves the filter purified. Therefore most smaller active carbon filters should be used with low pressure and cold water.

Carbon filtering is commonly used for water purification, air filtering, and industrial gas processing, for example, the removal of siloxanes and hydrogen sulfide from biogas. It is also used in a number of other applications, including respirator masks, the purification of sugarcane and the recovery of precious metals, especially gold. It is also used in cigarette filters and in the EVAP used in cars.

Each carbon filter is typically given a micron rating that specifies the size of the particle which the filter can remove from a fluid. Typical particle sizes which can be removed by carbon filters range from 0.5-50 μm. The efficacy of a carbon filter depends not only on its particle size but also on the rate of flow of fluid through the filter. Activated carbon can exhibit varying performance characteristics depending upon the strata from which it is derived (e.g., bituminous or anthracite coal, bone char, coconut shell) and the way it is manufactured. For example, if the fluid is allowed to flow through the filter at a slower rate, the contaminants will be exposed to the filter media for a longer amount of time, which will tend to result in fewer impurities. They can be used alone or in conjunction with other filters to significantly reduce the number of impurities in your home or office.