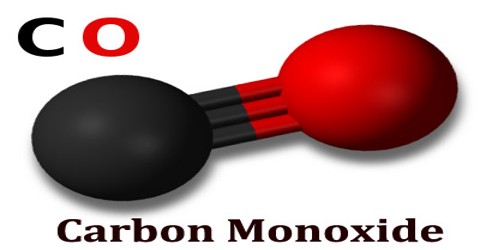 Carbon Monoxide (or CO) is a colorless, odorless gas formed when a compound containing carbon burns incompletely because there is not enough oxygen. It is present in the exhaust gases of automobile engines and is very poisonous. It is toxic to hemoglobic animals, both invertebrate and vertebrate, including humans when encountered in concentrations above about 35 ppm, although it is also produced in normal animal metabolism in low quantities, and is thought to have some normal biological functions. Carbon Monoxide (or CO) is a hematopoietic agent because hemoglobin in blood can absorb it 200 times more than oxygen. Therefore, specially in closed spaces, CO works as an asphyxiant by drastically depleting the blood’s ability to carry oxygen.

It is the simplest oxocarbon and is isoelectronic with the cyanide anion, the nitrosonium cation and molecular nitrogen. In coordination complexes the carbon monoxide ligand is called carbonyl.

Carbon monoxide’s toxicity is a consequence of its absorption by red blood cells in preference to oxygen, thus interfering with the transport of oxygen from the lungs to the tissues, in which it is required. Indication of carbon monoxide poisoning include headache, weakness, dizziness, nausea, fainting, and, in severe cases, coma, weak pulse, and respiratory failure. The physical properties of carbon monoxide are that it

The chemical properties of carbon monoxide are that it

It is also an important reducing agent in the chemical industry.

Carbon monoxide (CO) is an important industrial gas, which is widely used as a fuel. It is also an important reducing agent in the chemical industry.

Large quantities of aldehydes are produced by the hydroformylation reaction of alkenes, carbon monoxide, and H2. Hydroformylation is coupled to the Shell higher olefin process to give precursors to detergents.

In another application a mixture of metallic ores is heated to 122–176°F (50–80°C) in the presence of producer gas. All oxides except those of nickel are reduced to their metallic state. This process, known as the Mond process, is a way of separating nickel from other metals with which it commonly occurs. In biology, carbon monoxide is naturally produced by the action of heme oxygenase 1 and 2 on the heme from hemoglobin breakdown. This process produces a certain amount of carboxyhemoglobin in normal persons, even if they do not breathe any carbon monoxide.

Carbon monoxide also reacts with certain metals, especially iron, cobalt, and nickel, to form compounds known as carbonyls. Some of the carbonyls have unusual physical and chemical properties that make them useful in industry. The highly toxic nickel tetracarbonyl, for example, is used to produce very pure nickel coatings and powders.