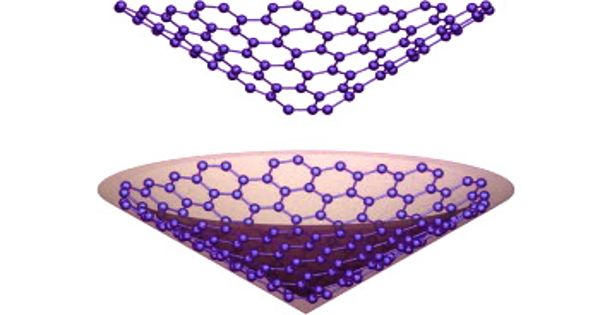 Carbon nanocones are conical structures that are made predominantly from carbon and which have at least one dimension of the order one micrometer or smaller. Mechanical properties of carbon nanocones are calculated by a spring-mass FE model. The effect of out-of-plane angle variation energy is incorporated into the calculations.

Nanocones occur on the surface of natural graphite. A related carbon nanoform is the single-walled carbon nanohorn which typically form aggregates 80–100 nm in size.

Nanocones have height and base diameter of the same order of magnitude; this distinguishes them from tipped nanowires which are much longer than their diameter. Carbon nanocones have been observed as free-standing structures among the products of the carbon arc method for producing Fullerenes and carbon nanotubes. The mechanical behaviors of carbon nanocone (CNCs) with an equivalent number of atoms under uniaxial extension and uniaxial compress are investigated using classical molecular dynamics simulations, exploring the Brenner and Lennard-Jones potentials to represent the interatomic interaction. 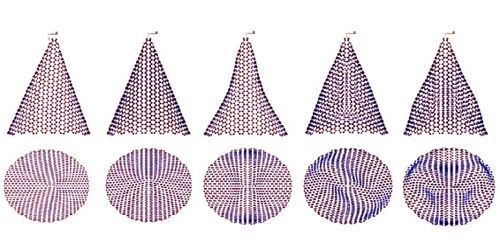 On the Vibration of Single-Walled Carbon Nanocones

Nanocones occur on the surface of natural graphite. Hollow carbon nanocones can also be produced by decomposing hydrocarbons with a plasma torch. Large-scale production of conical carbon nanostructures is possible through pyrolysis of hydrocarbons in a plasma torch process. Electron microscopy reveals that the opening angle (apex) of the cones is not arbitrary, but has preferred values of approximately 20°, 40°, and 60°. The resulting carbon cones occur in five distinctly different forms, and disc-shaped particles are produced as well. This observation was explained by a model of the cone wall composed of wrapped graphene sheets, where the geometrical requirement for seamless connection naturally accounted for the semi-discrete character and the absolute values of the cone angle. The structure and properties of these carbon cones and discs have been relatively little explored until now.

A related carbon nanoform is the single-walled carbon nanohorn which typically form aggregates 80–100 nm in size. The vibrational behavior of single-walled carbon nanocones is studied using a molecular structural method and molecular dynamics simulations. In the molecular structural approach, point mass and beam elements are employed to model the carbon atoms and the connecting covalent bonds, respectively. Simulation-based modeling can show a considerable part in the improvement of carbon nanocone-based composites by providing results that help in appreciative the performance of composites.