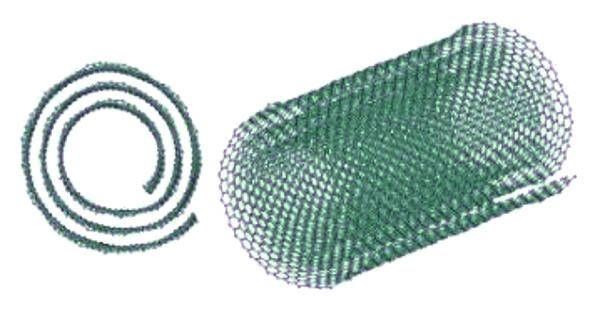 Carbon nanoscrolls (CNS) are graphene sheets wrapped spirally into continuous tubular structures similar to multiwalled carbon nanotubes (MWNT). It is a catalyst-free process where pyrolysis of polymer leads to the formation of carbon form and sodium carbonate.

A number of methods have been reported to produce carbon nanoscrolls, including arc discharge, high-energy ball milling, and intercalation, among others. Due to their unique topological structure, CNSs not only share the remarkable mechanical, electronic properties and thermal conductivity exhibited by carbon nanotubes and graphene but also are expected to exhibit novel features.

The wedge based mechanical exfoliation is also reported the similar CNS experimentally. Carbon nanotube scrolls (CNSs) provide an interesting form of carbon that ideally consists of a single sheet of graphite that is spiral-wrapped to form a nanotube. However, the real-world applications of nanoscroll products are limited due to their difficult colloidal processing. CNS formation is seen to automatically occur when a critical overlap between sheet layers is achieved for the partially curled sheet.

Thermodynamically, the nanoscale surfaces are stacking each other via van der Waals force to lower the energy barrier. Scrolling of suspended graphene sheets is investigated by transferring CVD graphene onto TEM grids. It is found that the suspended regions of graphene spontaneously form carbon nanoscrolls. To overcome this problem and obtain high-quality nanoscrolls, a polymer-assisted liquid exfoliation technique has been recently demonstrated, allowing manufacturing high throughput and high-quality CNS dispersions. The nanoscrolls are characterized using transmission electron microscopy and the presence of a continuous, tubular structure is confirmed by electron diffraction.

Carbon nanoscrolls (CNSs) belong to the same class of carbon-based nanomaterials as carbon nanotubes but are much less studied in spite of their great potential for applications in nanotechnology and bioengineering. Other material-based nanoscrolls, e.g. gold nanoscrolls, were also successfully attained by the exfoliation technique.