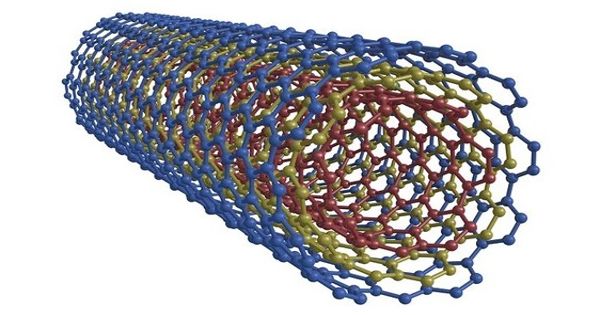 Carbon nanotubes (CNTs) are cylindrical molecules that consist of rolled-up sheets of single-layer carbon atoms (graphene). They are tubes made of carbon with diameters typically measured in nanometers. They are allotropes of carbon, made of graphite and constructed in cylindrical tubes with nanometer in diameter and several millimeters in length.

Carbon nanotubes are composed of carbon atoms linked in hexagonal shapes, with each carbon atom covalently bonded to three other carbon atoms. These have diameters as small as 1 nm and lengths up to several centimeters.

There are two main types of nanotubes: single-walled nanotubes (SWNTs) and multi-walled nanotubes (MWNTs). Carbon nanotubes often refer to single-wall carbon nanotubes (SWCNTs) with diameters in the range of a nanometer. Their impressive structural, mechanical, and electronic properties are due to their small size and mass, their strong mechanical potency, and they’re high electrical and thermal conductivity. Single-wall carbon nanotubes are one of the allotropes of carbon, intermediate between fullerene cages and flat graphene. They can be single-walled with a diameter of less than 1 nanometer (nm) or multi-walled, consisting of several concentrically interlinked nanotubes, with diameters reaching more than 100 nm. Their length can reach several micrometers or even millimeters. 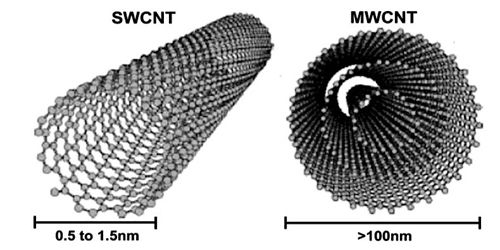 Nanotubes are members of the fullerene structural family, which also includes buckyballs. Whereas buckyballs are spherical in shape, a nanotube is cylindrical, with at least one end typically capped with a hemisphere of the buckyball structure. Carbon nanotubes also often refer to multi-wall carbon nanotubes (MWCNTs) consisting of nested single-wall carbon nanotubes weakly bound together by van der Waals interactions in a tree ring-like structure. If not identical, these tubes are very similar to Oberlin, Endo, and Koyama’s long straight and parallel carbon layers cylindrically arranged around a hollow tube.

There are numerous carbon nanotubes properties and applications that take full advantage of CNTs aspect ratio, mechanical strength, electrical and thermal conductivity. Carbon nanotubes can also refer to tubes with an undetermined carbon-wall structure and diameters less than 100 nanometers. Such tubes were discovered in 1952 by Radushkevich and Lukyanovich.