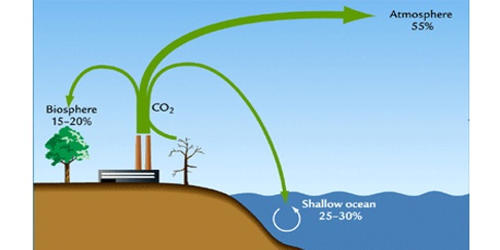 A carbon sink is a natural or artificial reservoir that absorbs and stores the atmosphere’s carbon with physical and biological mechanisms. It is natural or artificial deposits that absorb and store carbon from the atmosphere helping reduce the greenhouse effect. A carbon sink is any reservoir, natural or otherwise, that absorbs more carbon than it releases, and thereby lowers the concentration of CO2 from the atmosphere. The main natural carbon sinks are plants, soil, and the ocean. Globally, the two most important carbon sinks are vegetation and the ocean. The role of carbon sinks in preventing carbon levels to rise is of paramount importance. Ocean and land carbon sinks absorb around half of the carbon emissions. Public awareness of the significance of CO2 sinks has grown since the passage of the Kyoto Protocol, which promotes their use as a form of carbon offset. There are also different strategies used to enhance this process.

The carbon cycle is the biogeochemical cycle by which carbon is exchanged among five spheres of the Earth, carbon (C) sinks: the biosphere, pedosphere, lithosphere, hydrosphere, and atmosphere. The oceans are a major carbon storage system for carbon dioxide. Coal, oil, natural gases, methane hydrate, and limestone are all examples of carbon sinks.

Forest carbon sinks are not an excuse to delay action in reducing fossil fuel emissions. This is because carbon absorbed by trees is dynamic. Carbon sources include the combustion of fossil fuels (coal, natural gas, and oil) by humans for energy and transportation and farmland (by animal respiration), although there are proposals for improvements in farming practices to reverse this. The acidification of the oceans negatively impacts species such as corals, algae, shellfish, and mollusks, which are weakened and in many cases become ill and die.