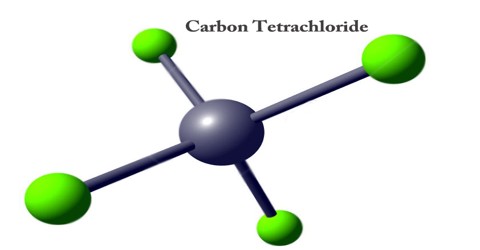 Carbon Tetrachloride is a clear, colorless, volatile and very stable chlorinated hydrocarbon. It is used as a solvent for oils and fats, as a refrigerant and as a dry-cleaning agent. Inhalation of its vapors can depress central nervous system activity and cause degeneration of the liver and kidneys. Carbon Tetrachloride is reasonably anticipated to be a human carcinogen based on evidence of carcinogenicity in experimental animals. It is an organic compound with the chemical formula CCl4. Carbon Tetrachloride has been shown to exhibit anesthetic, metal chelator and hepatoprotective functions. Carbon tetrachloride belongs to the family of Chlorocarbons. These are Any Compound consisting wholly of chlorine and carbon.

Carbon Tetrachloride was originally synthesized by the French chemist Henri Victor Regnault in 1839 by the reaction of chloroform with chlorine. Carbon tetrachloride is manufactured by the reaction of chlorine with carbon disulfide or with methane. The process with methane became dominant in the United States in the 1950s, but the process with carbon disulfide remains important in countries where natural gas, which is the principal source of methane, that is not plentiful. Carbon tetrachloride boils at 77° C (171° F) and freezes at -23° C (-9° F); it is much denser than water, in which it is practically insoluble. The production of carbon tetrachloride has steeply declined since the 1980s due to environmental concerns and the decreased demand for CFCs, which were derived from carbon tetrachloride. In 1992, production in the U.S./Europe/Japan was estimated at 720,000 tonnes. Carbon tetrachloride is corrosive to plastics, rubber, and coatings. It is miscible with most organic solvents such as benzene, chloroform, and ether, but is essentially insoluble in water. Carbon tetrachloride can decompose in direct flames to form phosgene and chlorine.

In the carbon tetrachloride molecule, four chlorine atoms are positioned symmetrically as corners in a tetrahedral configuration joined to a central carbon atom by single covalent bonds. Because of this symmetrical geometry, CCl4 is non-polar. Methane gas has the same structure, making carbon tetrachloride a halomethane. As a solvent, it is well suited to dissolving other non-polar compounds, fats, and oils. It can also dissolve iodine. Most carbon tetrachloride is used to make chlorofluorocarbon propellants and refrigerants, though this has been declining steadily. It has also been used as a dry cleaning agent and fire extinguisher; in making nylons; as a solvent for rubber cement, soaps, insecticides, etc.

The carbon tetrachloride type could also be installed in a spring-loaded wall fixture with a solder-based restraint. When the solder melted by high heat, the spring would either break the globe or launch it out of the bracket, allowing the extinguishing agent to be automatically dispersed into the fire.

Carbon Tetrachloride is one of the most potent hepatotoxins (toxic to the liver), so much so that it is widely used in scientific research to evaluate hepatoprotective agents. Exposure to high concentrations of carbon tetrachloride (including vapor) can affect the central nervous system, degenerate the liver and kidneys, and prolonged exposure may lead to coma or death. Chronic exposure to carbon tetrachloride can cause liver and kidney damage and could result in cancer. Carbon Tetrachloride is a toxic material. Although it has a wide range of application but its use has been highly suppressed. Carbon tetrachloride hazards include severe damage to nervous system, kidneys, degenerate liver, it can even cause cancer. It may lead to coma or even death in case of exposure to concentrated tetrachloromethane. Continued exposures to this gas can cause depression by affecting the nervous system.  Apart from its toxicity, it severely affects our environment. It is a greenhouse gas and has ozone-depleting properties and it is a significant cause of global warming and environmental damage.