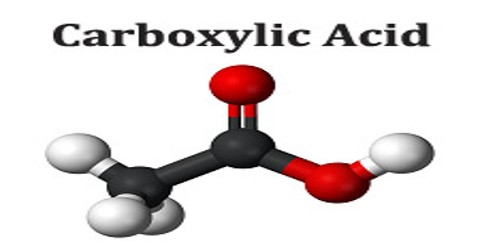 Carboxylic acids are acidic because of the hydrogen in the -COOH group. When the acids form salts, this is lost and replaced by a metal. When a carboxyl group is deprotonated, its conjugate base forms a carboxylate anion. Carboxylate ions are resonance-stabilized, and this increased stability makes carboxylic acids more acidic than alcohols. It can be seen as reduced or alkylated forms of the Lewis acid carbon dioxide; under some circumstances they can be decarboxylated to yield carbon dioxide.

Carboxylic acids are commonly identified using their trivial names, and usually have the suffix -ic acid. IUPAC-recommended names also exist; in this system, carboxylic acids have an -oic acid suffix.

Structure and Functions of Carboxylic Acid

Carboxylic acids occur widely in nature. The fatty acids are components of glycerides, which in turn are components of fat. Hydroxyl acids, such as lactic acid (found in sour-milk products) and citric acid (found in citrus fruits), and many keto acids are important metabolic products that exist in most living cells. Proteins are made up of amino acids, which also contain carboxyl groups. However, carboxylic acids have several particular structural features. In solution and in the liquid state of aggregation, simple carboxylic acids form dimers in which two carboxylic acid molecules are connected by two hydrogen bridges with a bond energy of about 7 kcal/mol. Carboxylic acids, esters, and carboxamides may be illustrated by two resonance structures, as the lone electron pairs of the oxygens, or the oxygen and nitrogen, in connection with the sp2 carboxyl carbon’s p orbital represent a π system. Due to the lower electronegativity of nitrogen in comparison to oxygen, the zwitterionic structure in carboxamides is more stable than in carboxylic acids and esters.

Most simple carboxylic acids were originally isolated from biological sources; because their structural formulas were often unknown at the time of isolation they were given names that were generally derived from the names of the sources.