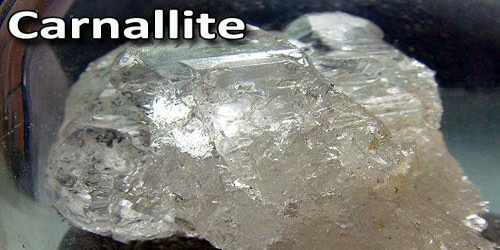 Carnallite was first described in 1856 from its type location of Stassfurt Deposit, Saxony-Anhalt, Germany. It was named for the Prussian mining engineer Rudolf von Carnall (1804–1874).

It occurs with a sequence of potassium and magnesium evaporite minerals: sylvite, kainite, picromerite, polyhalite, and kieserite. Carnallite is an uncommon double chloride mineral that only forms under specific environmental conditions in an evaporating sea or sedimentary basin.

Occurrences, Structure and Properties of Carnalite

Carnallite occurs with other chloride minerals in the upper layers of marine salt deposits, where it appears to be an alteration product of pre-existing salts. The mineral is found principally in the northern German salt deposits; and also in Spain, Tunisia, and the southwestern United States. Carnallite minerals are mineral sediments known as evaporites. Evaporites are concentrated by evaporation of seawater. The inflow of water must be below the evaporation or use levels. This creates a prolonged evaporation period. In controlled environment experiments, the halides form when 10%–20% of the original sample of water remains. Closer to 10 percent sylvite followed by Carnallite form. It is an important source of potash, an invaluable fertilizer. Sylvite is the more important source of potash, but carnallite makes a significant contribution. Carnallite’s magnesium output is of much lesser importance world wide but is still Russia’s most significant source. Potassium is actually a common element, but unfortunately it is bound up in insoluble silicate minerals such as potassium feldspars. In order for potassium to be useful as a fertilizer it needs to be in a soluble form and thus soluble potassium salts are the source of choice.

Carnallite has corner- and face-sharing. There is a network of KCl6 octahedra, with two-thirds of them sharing faces. Mg(H2O)6 octahedra occupy the open spaces within the KCl octahedra. The interatomic distance between the Mg and the H2O ranges from 0.204 to 0.209 nm., with an average is 0.2045 nm. The interatomic distance between K and Cl ranges 0.317 to 0.331 nm., with an average of 0.324 nm. The resulting structure has a calculated density of 1.587 g/cm3, in good agreement with the measured value of 1.602 g/cm3.

Carnallite is relatively easy to distinguish from other evaporate minerals. Its taste is bitter and it has no cleavage, unlike halite. Carnallite is extremely light with a specific gravity of only 1.6 and it also shows a violet flame result when it is put in a gas flame due to its potassium content, unlike kieserite and other non-potassium salts.