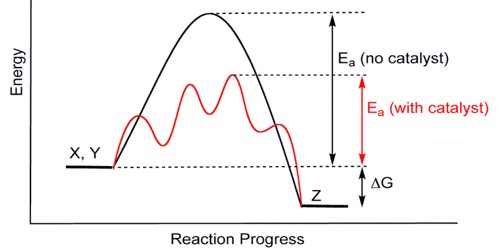 Catalysis is the change in speed (rate) of a chemical reaction due to the help of a catalyst. It is the process of modifying a chemical reaction with the use of a catalyst. It plays an important role in organic chemistry. Unlike other chemicals that take part in the reaction, a catalyst is not consumed by the reaction itself. A catalyst may participate in many chemical reactions. Catalysts that speed the reaction are called positive catalysts. Catalysts that slow the reaction are called negative catalysts, or inhibitors. For example, catalysts can produce more heat, form specific intermediates that are not created naturally, bind the reagents to polarize bonds or cause the dissociation of reactions back to their reactive forms. Substances that increase the activity of catalysts are called promoters, and substances that deactivate catalysts are called catalytic poisons.

A catalyst is something that changes the rate of a chemical reaction. An example is when manganese oxide (MnO2) is added to hydrogen peroxide (H2O2), and the hydrogen peroxide starts to break up into water and oxygen. Catalysts are either of natural or synthetic origin. They are substances that increase the reaction rate of a chemical reaction without being consumed in the process.

Catalysts are useful because they leave no residue in the solution they have sped up. A catalyst can also be used in a reaction again and again as it is not used up. The catalyst works by opening up a route between starting material and product with a lower activation barrier than the uncatalyzed process. There are many catalysts in our body that play an important part in many biochemical reactions. These are called enzymes. Most catalysts work by lowering the ‘activation energy’ of a reaction. This allows less energy to be used, thus speeding up the reaction. The opposite of a catalyst is an inhibitor. Inhibitors slow down reactions. Some of them are found in snake venom and are dangerous for our nervous system or heart.