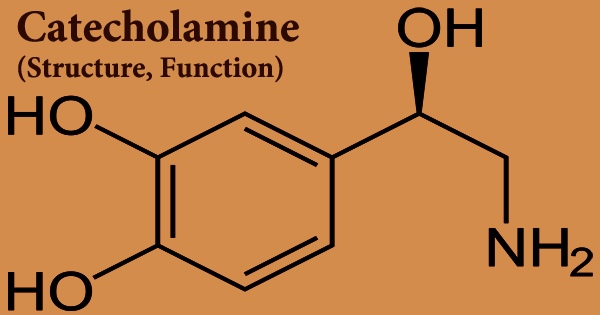 A catecholamine (/ˌkætəˈkoʊləmiːn/; abbreviated CA) is a naturally occurring amine that acts as a neurotransmitter and a hormone in the body. Catechol can exist as a free molecule or as a substitute for a 1,2-dihydroxybenzene group in a bigger molecule. Catecholamines have a catechol group (a benzene ring with two hydroxyl groups) and an amine (nitrogen-containing) group connected to it. Dopamine, epinephrine (adrenaline), and norepinephrine (noradrenaline) are catecholamines.

Catecholamines are made up of the amino acid tyrosine, which can be obtained from food or synthesized from phenylalanine. Depending on the type of receptor engaged, α or β, the response might be either lightening or darkening of the animal due to the aggregation or dispersion of melanophore, erythrophore, or xanthophore pigment granules. Catecholamines are water-soluble and bind to plasma proteins in circulation 50% of the time. Epinephrine (adrenaline), norepinephrine (noradrenaline), and dopamine are catecholamines.

Individual catecholamine levels that are unusually high or low can cause medical problems. Multiple catecholamine levels that are too high or too low can signal a major medical problem. Catecholamine-secreting cells convert tyrosine to L-DOPA and subsequently to dopamine through a series of events. Depending on the cell type, dopamine may be further converted to norepinephrine or even further converted to epinephrine.

A catechol (a benzenic ring with two hydroxyl groups) and an amine lateral chain make up catecholamines. Epinephrine, generated and released by the interrenal gland, and norepinephrine, produced and released by the postganglionic neurons of the sympathetic division of the autonomic nervous system, are the two most important catecholamines in pigmentation physiology. Catecholamine analogues include a variety of stimulant medications (including a number of substituted amphetamines).

The amino acid L-tyrosine is used to make all catecholamines in the following sequence: tyrosine → dopa (dihydroxyphenylalanine) → dopamine → norepinephrine (noradrenaline) → epinephrine (adrenaline). Catecholamines have a benzene ring with two hydroxyl groups, an intermediate ethyl chain, and a terminal amine group in their structure. The hydroxyl group on the ethyl chain of phenylethanolamines like norepinephrine is present. The brain, the adrenal medulla, and some sympathetic nerve fibers all produce catecholamines.

Catecholamines are made from the amino acid l-tyrosine, which is stored in adrenergic neurons and transformed to l-DOPA by the enzyme thyroxin hydroxylase. Catecholamines are primarily produced by the chromaffin cells of the adrenal medulla and the sympathetic nervous system’s postganglionic fibers. Thyroxin hydroxylase, on the other hand, should not be confused with thyronase, which is both a hydroxylase and an oxidase. Dopamine is primarily produced in neuronal cell bodies in two parts of the brainstem: the ventral tegmental area and the substantia nigra, which contains neuromelanin-pigmented neurons.

The type of catecholamine produced by a nerve cell, or neuron, is determined by the enzymes present in that cell. Catecholamines are neurotransmitters that also operate as hormones. The brain, neural tissues, and adrenal glands all manufacture them. Just above the kidneys are the adrenal glands. Alpha-methyl-p-tyrosine (AMPT), which inhibits tyrosine hydroxylase, reduces catecholamine production.

The enzyme that catalyzes the conversion of norepinephrine to epinephrine is only formed in the adrenal medulla when high local concentrations of glucocorticoids from the adjacent adrenal cortex are present; chromaffin cells in tissues outside the adrenal medulla are unable to synthesize epinephrine. When circulating in the circulation, catecholamines have a half-life of a few minutes. They can be destroyed by catechol-O-methyltransferases (COMT) or monoamine oxidases (MAO) through methylation or deamination.

High catecholamine levels can indicate a tumor, such as a neuroendocrine tumor or neuroblastoma, albeit this is uncommon. Individual catecholamine levels that are too high have been linked to illnesses like schizophrenia, ADHD, depression, and Parkinson’s disease. Norepinephrine and dopamine, two catecholamines, operate as neuromodulators in the central nervous system and hormones in the circulatory system. Stress is linked to high catecholamine levels in the blood, which can be caused by psychological reactions or environmental stressors such as loud noises, bright light, or low blood sugar levels.

L-Dopa is well-known for its function in the treatment of Parkinson’s disease, but it also has biological significance as a precursor of dopamine, a neurotransmitter found throughout the central nervous system, including the brain’s basal ganglia. The subtypes of adrenoceptors that mediate aggregation by catecholamine action have been discovered in several investigations, particularly of teleost chromatophores. Pheochromocytoma, a curable illness characterized by extremely high catecholamine levels, can also be caused by neuroendocrine tumors in the adrenal medulla.

After being broken down, catecholamine is secreted into urine, and the level of secretion can be analyzed to diagnose disorders linked to high catecholamine levels in the body. The majority of steroids and thyroid hormones, as well as many amines, are delivered predominantly bound to specific plasma proteins, with a tiny amount of free hormones in the mix. Blood tests are also used to determine the level of catecholamines in the body. Catecholamine tests are used to detect malignancies in the adrenal gland or neurological system. Pheocromocytoma, paraganglioma, and neuroblastoma are all malignancies that can be detected via catecholamine testing.