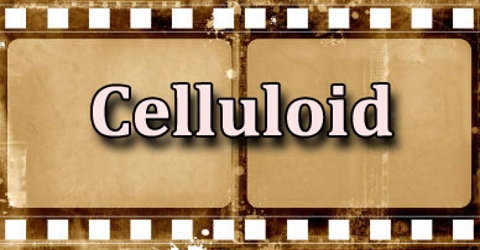 Celluloid is a flammable thermoplastic material consisting of cellulose nitrate mixed with a plasticizer, usually camphor: used in sheets, rods, and tubes for making a wide range of articles. Generally regarded to be the first thermoplastic, it was first created as Parkesine in 1862 and as Xylonite in 1869, before being registered as Celluloid in 1870. Celluloid is easily molded and shaped, and it was first widely used as an ivory replacement. It is a tough, flexible, and moldable material that is resistant to water, oils, and dilute acids and capable of low-cost production in a variety of colours, celluloid was made into toiletry articles, novelties, photographic film, and many other mass-produced goods. Its popularity began to wane only toward the middle of the 20th century, following the introduction of plastics based on entirely synthetic polymers.

History and Production of Celluloid

Celluloid is the first synthetic plastic material, developed in the 1860s and 1870s from a homogeneous colloidal dispersion of nitrocellulose and camphor. Some historians trace the invention of celluloid to English chemist Alexander Parkes, who in 1856 was granted the first of several patents on a plastic material that he called Parkesine. Parkesine plastics were made by dissolving nitrocellulose in solvents such as alcohol or wood naphtha and mixing in plasticizers such as vegetable oil or camphor. In 1867 Parkes’s business partner, Daniel Spill, patented Xylonite, a more-stable improvement upon Parkesine. Spill went on to found the Xylonite Company (later the British Xylonite Company Ltd.), which produced molded objects such as chess pieces from his material. The name Celluloid actually began as a trademark of the Celluloid Manufacturing Company, first of Albany, NY, and later of Newark, New Jersey, which manufactured the celluloids patented by John Wesley Hyatt. Hyatt used heat and pressure to simplify the manufacture of these compounds. Over the years, celluloid became the common use term used for this type of plastic. In 1878 Hyatt was able to patent a process for injection moulding thermoplastics, although it took another fifty years before it could be realised commercially, and in later years celluloid was used as the base for photographic film.

Celluloid is made from a mixture of chemical such as nitrocellulose, camphor, alcohol, as well as colorants and fillers depending on the desired product. The first step is transforming raw cellulose into nitrocellulose by conducting a nitration reaction. This is achieved by exposing the cellulose fibers to an aqueous solution of nitric acid; the hydroxyl groups (-OH) will then be replaced with nitrate groups (-NO2) on the cellulose chain. The reaction can produce mixed products, depending on the degree of substitution of nitrogen, or the percent nitrogen content on each cellulose molecule; cellulose nitrate has 2.8 molecule of nitrogen per molecule of cellulose.

A typical formulation of celluloid might contain 70 to 80 parts nitrocellulose, nitrated to 11% nitrogen, 30 parts camphor, 0 to 14 parts dye, 1 to 5 parts ethyl alcohol, plus stabilizers and other agents to increase stability and reduce flammability. By 1870, Hyatt discovered another useful application for celluloid: It became an alternative for rubber in molding dentures, as rubber had become expensive due to a demand for bicycle tires. He formed the Albany Dental Plate Company and supplied dentists across America with the material to make false teeth.

Celluloid was useful for creating cheaper jewellery, jewellery boxes, hair accessories and many items that would earlier have been manufactured from ivory, horn or other expensive animal products. It was often referred to as “Ivorine” or “French Ivory”. For this use a form of Celluloid was developed in France that had lines that resembled those of Ivory. It was also used for dressing table sets, dolls, picture frames, charms, hat pins, buttons, buckles, stringed instrument parts, accordions, fountain pens, cutlery handles and kitchen items. The main disadvantage the material had was that it was flammable. Items made in celluloid are collectible today and increasingly rare in good condition. It was soon overtaken by Bakelite and Catalin. Table tennis balls are still made from celluloid.