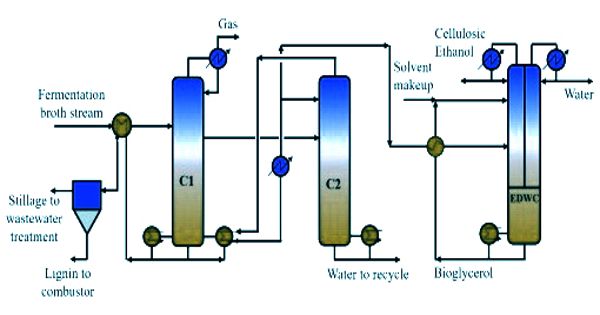 Ethanol is an alcohol that can be created from a wide variety of plant materials and feedstocks and is used in the liquid form to fuel in motor vehicles. Cellulosic ethanol is ethanol (ethyl alcohol) produced from cellulose (the stringy fiber of a plant) rather than from the plant’s seeds or fruit. Cellulosic ethanol is chemically identical to first-generation bioethanol (i.e. CH3CH2OH). However, it is produced from different raw materials via a more complex process (cellulose hydrolysis). 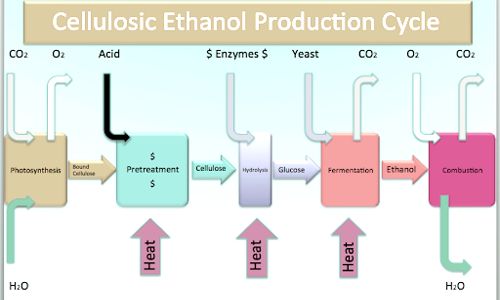 Considerable interest in cellulosic ethanol exists due to its important economical potential. The abundance of cellulosic materials, which boils down to about 60 to 90 percent of earth biomass measured by weight, along with the fact that they are not used for food and feed, are significant reasons why cellulosic ethanol and other cellulose-based biofuels are so appealing to scientific and political scholars. Growth of cellulose by plants is a mechanism that captures and stores solar energy chemically in nontoxic ways with resultant supplies that are easy to transport and store. Cellulosic ethanol also has the hypothetical ability to provide substantial lifecycle GHG reductions compared to petroleum-based gasoline. Additionally, transport may be unneeded anyway, because grasses or trees can grow almost anywhere temperate. This is why commercially practical cellulosic ethanol is widely viewed as the next level of development for the biofuel industry that could reduce demand for oil and gas drilling in ways that grain-based ethanol fuel alone cannot. The main idea and potential benefits associated with biofuels is to extract the energy that is stored in plants, turn it into cellulosic ethanol, and replace a significant amount of the oil demand, mainly for transportation purposes. Potential exists for the many benefits of carbonaceous liquid fuels and petrochemicals but in a carbon cycle–balanced and renewable way.

Commercially practical cellulosic alcohol could also avoid one of the problems with today’s conventional (grain-based) biofuels, which is that they set up a competition for grain with food purposes, potentially driving up the price of food. The chemical make-up of ethanol is uniform across the board whether it is produced from corn, sugarcane, or cellulose; however, the differences lie in the production processes and the necessary technologies in different stages of development. To date, what stands in the way of these goals is that the production of cellulosic alcohol is not yet sufficiently practical on a commercial scale. Cellulosic ethanol is produced from lignocellulosic biomass, which is primarily composed of cellulose and lignin found in dry plant matter