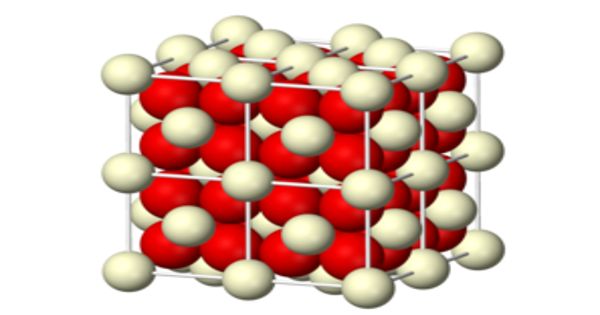 Cerium(IV) oxide is a metal oxide with the formula CeO2. It is also known as ceric oxide, ceric dioxide, ceria, cerium oxide, or cerium dioxide, is an oxide of the rare-earth metal cerium. It is a cerium molecular entity and a metal oxide. It is a pale yellow-white powder with the chemical formula CeO2. It is used for polishing glass, in coatings for infra-red filters to prevent reflection, and as an oxidant and catalyst in organic synthesis.

It is an important commercial product and an intermediate in the purification of the element from the ores. It is dioxide obtained as a colorless to yellow heavy powder usually by igniting a cerium compound (as the oxalate) and used as a polishing agent and especially in the hydrated form as a decolorizer for glass. The distinctive property of this material is its reversible conversion to a non-stoichiometric oxide. The environmental fate of CeO2 nanoparticles is highly dependent on their physicochemical properties in a low-temperature geochemical environment.

Cerium occurs naturally as a mixture with other rare-earth elements in its principal ores bastnaesite and monazite. After extraction of the metal ions into an aqueous base, Ce is separated from that mixture by the addition of an oxidant followed by adjustment of the pH. This step exploits the low solubility of CeO2 and the fact that other rare-earth elements resist oxidation.

Cerium(IV) oxide is formed by the calcination of cerium oxalate or cerium hydroxide. It is a pink powder derived from the metallic element cerium. It is used to polish lenses and it is also added to ophthalmic glass to absorb ultraviolet radiations.

Cerium also forms cerium(III) oxide, Ce2O3, which is unstable and will oxidize to cerium(IV) oxide.

Cerium oxide is commonly used as an abrasive; the powder is used in the grinding/polishing of other materials. For many years, it was used for polishing specialized glass (telescope mirrors, for example). It is also used in heat-resistant alloy coatings and in ceramic coatings.

Cerium oxide nanoparticle has wide range applications in the diverse fields. It plays a critical role in food security and agricultural sustainability.