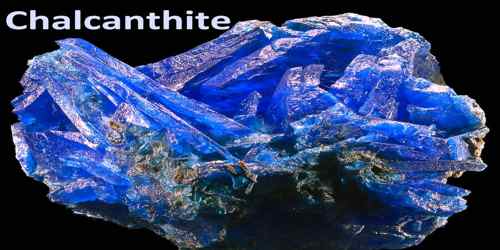 Chalcanthite is a secondary mineral, which is natural, water-soluble copper sulphate (CuSO4·5H2O) and that is formed in arid climates or in rapidly oxidizing copper deposits. It is usually of post-mining formation, forming on mine walls and by the action of acidic surface waters on copper veins.

Chalcanthite has a long list of synonyms. The word derives from the Greek and means ‘copper flower’. One can find it called blue vitriol, cyanose, cyanosite, copper vitriol, or calcantite. It has 20 synonyms or varied names in different languages, in all. It is formed when copper is oxidized, usually after copper has been mined. It grows on the walls of mines. It ranges in color from green to the more common blue. Chalcanthite crystals are transparent or translucent, but soft, having hardness on the Moh’s scale of only 2.5. It breaks easily and has a sharp, brittle texture.

It occurs in the oxidized zone of copper deposits and is frequently found on the timbers and walls of mine workings, where it has crystallized from mine waters. It was formerly an important ore mineral in Chile and was a minor ore at Butte, Mont. At one time large quantities were shipped to the Comstock Lode in Nevada, where it was used to reduce silver ores. Its blue crystals dehydrate to an opaque greenish-white powder on exposure to dry air.

Occurrences and Properties of Chalcanthite

Chalcanthite is generally found in arid regions, and less frequently occurs in wetter areas. It is used in some holistic health applications and as a teaching tool in schools because of its ability to crystallize quickly. On a few occasions, the mineral is found in such abundance that it can be mined for copper ore.

Chalcanthite generally forms in arid regions and dry caves which are protected from moisture. It commonly forms stalactitic and botryoidal growths on the walls and ceilings of mine tunnels from the oxidation of copper sulfide minerals. Chalcanthite specimens must be kept away from water and moist conditions, since a chemical effect with water causes them to eventually crumble or dissolve. Some collector’s specimens are coated with mineral oil and sprayed with laquer to seal the mineral and prevent it from absorbing water. Chalcanthite is a very fragile mineral, and care should be taken when handling any specimen. Chalcanthite’s blue color is one of its most notable features, but it is insufficient in identification. Other useful tests include associated minerals, crystal habit, solubility and subsequent coloring of the water blue, and taste. However: chalcanthite has a sweetly metallic taste, but taste testing should not be done haphazardly. The specimen should be never touched with the tongue, as chalcanthite is poisonous. The liquid from chalcanthite will also stain skin blue for several days.

Its crystals, which are rare in nature, are in short prismatic form and in thick tabular crystals. Most often as fibrous veins, which are commonly curved, and as and flowering curved masses of parallel fibrous crystals. Also botryoidal, stalactitic, encrusting, massive, as tiny, slender needles, and lenticular. Chalcanthite is used by holistic medical practitioners as an oral medicine to purge the body of toxins and phlegm. It is also used externally to reduce abscesses and dead tissue, and to reduce inflammation of the skin. It should never be used either internally or externally without the guidance of a physician, and also should never be used by pregnant women or young children.

Though it is not the most useful of minerals, by far, it is certainly prized as one of the best looking. Finding chalcanthite in its natural setting is quite a coup to rock collectors, who enjoy its lustrous but transient nature.