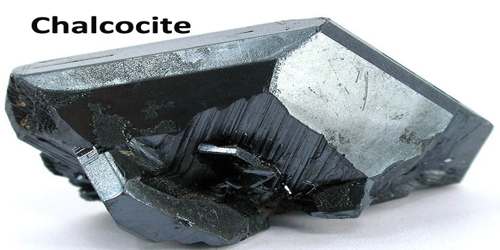 Chalcocite (Cu2S) is a lead-grey or black mineral, found as a copper ore or in veins. It is a source of copper. It is most commonly found as a supergene mineral in the enriched zones of sulfide deposits. It is also occurs in hydrothermal veins. It has a hardness of 2½ – 3 on the Mohs scale. It is a sulfide with an orthorhombic crystal system. Chalcocite is named after the Greek word chalcos, which means “copper” in Greek, in allusion to the copper content in this mineral. Chalcocite forms from the alteration of other minerals, especially other copper sulfides such as Bornite, Covellite, and Chalcopyrite, and may also form pseudomorphs after these minerals. It often forms in association with Chrysocolla, with the Chrysocolla forming as an alteration around the Chalcocite.

Chalcocite is a coveted and iconic mineral among collectors. Specimens from classic and extinct localities, such as Cornwall, England and Bristol, Connecticut, will command extremely high prices, especially when in good crystals.

Occurrences and Properties of Chalocite

Chalcocite, sulfide mineral that is one of the most important ores of copper. Valuable occurrences include deposits of sulfide minerals at Ely, Nev., and Morenci, Ariz., where other components of the original rock have been dissolved away; it is also found with bornite in the sulfide veins of Tsumeb, Namibia, and Butte, Mont. However, most chalcocite occurs in the supergene enriched environment below the oxidation zone of copper deposits as a result of the leaching of copper from the oxidized minerals. It is also often found in sedimentary rocks. It has been mined for centuries and is one of the most profitable copper ores. The reasons for this is its high copper content (66.6% atomic ratio and nearly 80% by weight) and the ease at which copper can be separated from sulfur. It’s Formed in copper deposits, usually as a secondary mineral in the oxidized zone, and often as an alteration of primary copper minerals in ore veins. Also found in volcanic basalt deposits.

Since chalcocite is a secondary mineral that forms from the alteration of other minerals, it has been known to form pseudomorphs of many different minerals. A pseudomorph is a mineral that has replaced another mineral atom by atom, but it leaves the original mineral’s crystal shape intact. Chalcocite has been known to form pseudomorphs of the minerals bornite, covellite, chalcopyrite, pyrite, enargite, millerite, galena and sphalerite.