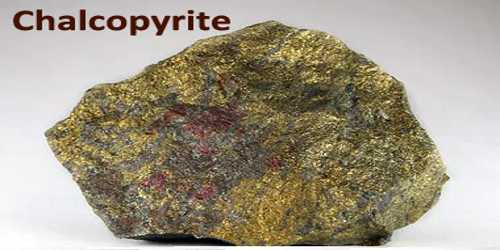 Chalcopyrite is a brassy yellow, metallic, tetragonal mineral, usually occurring as shapeless masses of grains and a hardness of 3.5 to 4 on the Mohs scale. Chalcopyrite is found in igneous rocks and copper-rich shales, and it is an important ore of copper. Because of its shiny look and often yellow color, it is sometimes mistaken for gold, and for this reason it is also called fool’s gold. It has the chemical formula CuFeS2. It typically occurs in ore veins deposited at medium and high temperatures, as in Río Tinto, Spain; Ani, Japan; Butte, Mont.; and Joplin, Mo. Chalcopyrite (Cu2Fe2S4) is a member of a group of sulfide minerals that crystallize in the tetragonal system; the group also includes stannite. Both minerals have crystalline structures related to sphalerite.

The surface of chalcopyrite loses its metallic luster and brass-yellow color upon weathering. It tarnishes to a dull, gray-green color, but in the presence of acids, the tarnish can develop a red to blue to purple iridescence.

“Peacock Ore” which is sold to many amateur mineral collectors often as a variety of Bornite, is in fact almost always Chalcopyrite treated with acid to produce an iridescent tarnish. Though some Chalcopyrite is naturally iridescent, wild colors such as strong blues and purples are usually formed from acid treatment.

Occurrences and Properties of Chalcopyrite –

Chalcopyrite forms under a variety of conditions. Some is primary, crystallizing from melts as accessory minerals in igneous rocks. Some forms by magmatic segregation and is in the stratified rocks of a magma chamber. Some occurs in pegmatite dikes and contact metamorphic rocks. Some is disseminated through schist and gneiss. Many volcanogenic massive sulfide deposits containing chalcopyrite are known. Chalcopyrite is the most important copper ore. Chalcopyrite ore occurs in a variety of ore types, from huge masses as at Timmins, Ontario, to irregular veins and disseminations associated with granitic to dioritic intrusives as in the porphyry copper deposits of Broken Hill, the American cordillera and the Andes. The largest deposit of nearly pure chalcopyrite ever discovered in Canada was at the southern end of the Temagami Greenstone Belt where Copperfields Mine extracted the high-grade copper.

Chalcopyrite is present in the supergiant Olympic Dam Cu-Au-U deposit in South Australia.

Natural chalcopyrite has no solid solution series with any other sulfide minerals. There is limited substitution of Zn with Cu despite chalcopyrite having the same crystal structure as sphalerite.

Minor amounts of elements such as Ag, Au, Cd, Co, Ni, Pb, Sn, and Zn can be measured (at part per million levels), likely substituting for Cu and Fe. Selenium, Bi, Te, and as may substitute for sulfur in minor amounts. The most obvious physical properties of chalcopyrite are its brassy yellow color, metallic luster, and high specific gravity. These give it a similar appearance to pyrite and gold. Distinguishing these minerals is easy. Gold is soft, has a yellow streak and has a much higher specific gravity. Chalcopyrite is brittle and has a greenish gray streak. Pyrite is hard enough that it cannot be scratched with a nail, but chalcopyrite is easily scratched with a nail. Chalcopyrite is a fairly common mineral, and therefore only the finest of localities will be mentioned. The only important use of chalcopyrite is as an ore of copper, but this single use should not be understated. Chalcopyrite has been the primary ore of copper since smelting began over five thousand years ago.

Some chalcopyrite ores contain significant amounts of zinc substituting for iron. Others contain enough silver or gold that the precious metal content more than pays the costs of mining.