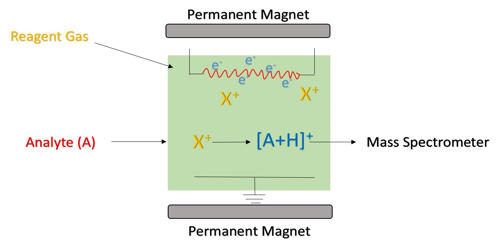 The earliest ionization technique was electron bombardment ionization (EI). The product obtained by EI has many fragments, which is difficult to analyze. CI, which produced very few fragments, began in the 1950s and has great potential in analytical chemistry. The sample molecules are then ionized by reagent ions through the molecular and ion reaction pathways. The 1970s was considered a milestone in the development of CI.

Chemical ionization or CI is another ionization technique used widely in GC MS applications. CI mass spectrometry is a useful tool in structure elucidation of organic compounds. The CI source is very similar to the EI source but the beam of electrons is used to create a plasma of ionized reagent gas. This is possible with CI because the formation of [M+1]+ eliminates a stable molecule, which can be used to guess the functional groups present. This process is less energetic than EI and generally produces less fragmentation. Besides that, CI facilitates the ability to detect the molecular ion peak, due to less extensive fragmentation. Chemical ionization can also be used to identify and quantify an analyte present in a sample, by coupling chromatographic separation techniques to CI such as gas chromatography (GC), high-performance liquid chromatography (HPLC) and capillary electrophoresis (CE). This allows selective ionization of an analyte from a mixture of compounds, where accurate and precise results can be obtained.