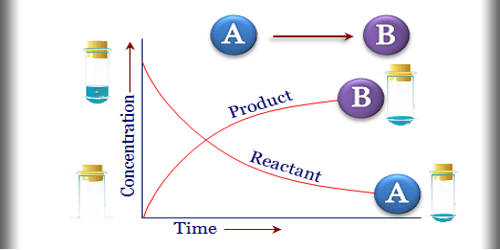 Chemical kinetics is the branch of physical chemistry that is concerned with understanding the rates of chemical reactions. It is the description of the rate of a chemical reaction. It is to be contrasted with thermodynamics, which deals with the direction in which a process occurs but in itself tells nothing about its rate. This is the rate at which the reactants are transformed into products. Chemical kinetics includes investigations of how experimental conditions influence the speed of a chemical reaction and yield information about the reaction’s mechanism and transition states, as well as the construction of mathematical models that also can describe the characteristics of a chemical reaction. This may take place by abiotic or by biological systems, such as microbial metabolism.

The experimental determination of reaction rates involves measuring how the concentrations of reactants or products change over time. One of the goals of these experiments is to describe the rate of reaction – the rate at which the reactants are transformed into the products of the reaction. For example, the concentration of a reactant can be measured by spectrophotometry at a wavelength where no other reactant or product in the system absorbs light. The term rate is often used to describe the change in a quantity that occurs per unit of time.

For reactions that take at least several minutes, it is possible to start the observations after the reactants have been mixed at the temperature of interest.

For faster reactions, the time required to mix the reactants and bring them to a specified temperature may be comparable or longer than the half-life of the reaction. The rate of a chemical reaction usually has units of sec-1, however, kinetics experiments may span several minutes, hours, or even days.

Stopped flow methods, which can reduce the mixing time to the order of a millisecond. The stopped-flow methods have a limitation, for example, we need to consider the time it takes to mix gases or solutions and are not suitable if the half-life is less than about a hundredth of a second.

Chemical relaxation methods such as temperature jump and pressure jump, in which a pre-mixed system initially at equilibrium is perturbed by rapid heating or depressurization so that it is no longer at equilibrium, and the relaxation back to equilibrium is observed. For example, this method has been used to study the neutralization H3O+ + OH− with a half-life of 1 μs or less under ordinary conditions.

Chemical kinetics tells us the speed at which chemical species transform into new substances by breaking and reforming their molecular bonds. The mathematical models that describe chemical reaction kinetics provide chemists and chemical engineers with tools to better understand and describe chemical processes such as food decomposition, microorganism growth, stratospheric ozone decomposition, and the chemistry of biological systems. These models can also be used in the design or modification of chemical reactors to optimize product yield, more efficiently separate products, and eliminate environmentally harmful by-products.