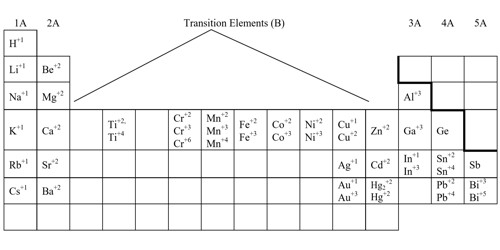 Chemical nomenclature is a set of rules for creating a system of names (“nomenclature”) for chemicals. It is the term given to the naming of compounds. This is done so that everyone uses the same name for a chemical. Chemists use specific rules and “conventions” to name different compounds. The system used most often around the world today is the one created and developed by the International Union of Pure and Applied Chemistry (IUPAC).  This module describes an approach that is used to name simple ionic and molecular compounds, such as NaCl, CaCO3, and N2O4. Nomenclature is defined as a system of names and terms used in a particular field of study or community. An example of nomenclature is the language of sculpture.

Name the following ionic compounds, which contain metal that can have more than one ionic charge: (a) Fe2S3 and (b) CuSe.

The IUPAC’s rules for naming chemical compounds are written in a series of books. The system for naming organic compounds is written in the Blue Book. The rules for organic compounds, in which carbon is the principal element, will be treated in a later chapter on organic chemistry. The system for naming inorganic compounds is written in the Red Book. A third book, called the Green Book, gives recommendations about the use of symbols for physical quantities. A fourth book, the Gold Book, contains the definitions of many of the technical terms used in chemistry. Similar books exist for biochemistry, analytical chemistry, macromolecular chemistry, and clinical chemistry. The Recommendations are published in the IUPAC journal, Pure and Applied Chemistry (PAC) and journal issues are freely-available in the year following their publication. The books do not cover everything, however. Shorter recommendations for specific circumstances are published sometimes in the journal Pure and Applied Chemistry.