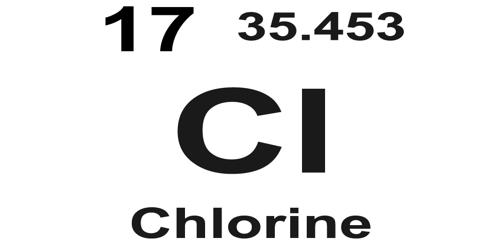 Chlorine is a chemical element with the symbol Cl and atomic number 17. It is a greenish-yellow gas at room temperature and atmospheric pressure. The second-lightest of the halogens, it appears between fluorine and bromine in the periodic table and its properties are mostly intermediate between them. Chlorine is a yellow-green gas at room temperature. It is a toxic, corrosive, greenish-yellow gas that is irritating to the eyes. The gas is soluble (dissolvable) in water.

The most common compound of chlorine, sodium chloride (common salt), has been known since ancient times. Around 1630, chlorine gas was first synthesized in a chemical reaction, but not recognized as a fundamentally important substance. Carl Wilhelm Scheele wrote a description of chlorine gas in 1774, supposing it to be an oxide of a new element. Scheele knew that chlorine was a new element, but thought it contained oxygen as well.

Because of its great reactivity, all chlorine in the Earth’s crust is in the form of ionic chloride compounds, which include table salt. It constitutes 0.017 percent of Earth’s crust. It is the second-most abundant halogen (after fluorine) and the twenty-first most abundant chemical element in Earth’s crust. These crustal deposits are nevertheless dwarfed by the huge reserves of chloride in seawater. The most common compound of chlorine is sodium chloride, which is found in nature as crystalline rock salt, often discolored by impurities.

Chlorine is a dense gas with a density of 3.21 grams per liter. It changes from a gas into a liquid at a temperature of -34.05°C (-29.29°F) and from a liquid to a solid at -101.00°C (-149.80°F). Elemental chlorine is commercially produced from brine by electrolysis, predominantly in the Chlor-alkali process. The high oxidizing potential of elemental chlorine led to the development of commercial bleaches and disinfectants and a reagent for many processes in the chemical industry. It is a strong oxidizing agent.

Chlorine is used in the manufacture of a wide range of consumer products, about two-thirds of them organic chemicals such as polyvinyl chloride (PVC), many intermediates for the production of plastics, and other end products which do not contain the element. This is a very versatile plastic used in window frames, car interiors, electrical wiring insulation, water pipes, blood bags, and vinyl flooring.

Chlorine kills bacteria – it is a disinfectant. It is used to treat drinking water and swimming pool water.

Another major use of chlorine is in organic chemistry. It is used as an oxidizing agent and in substitution reactions. 85% of pharmaceuticals use chlorine or its compounds at some stage in their manufacture.